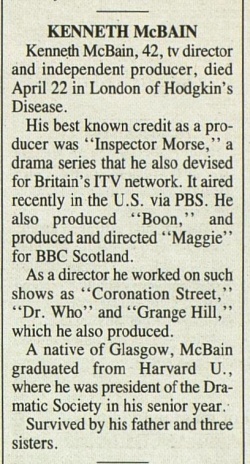 His best known credit as a producer was "Inspector Morse," a drama series that he also devised for Britain's ITV network. It aired recently in the U.S. via PBS. He also produced "Boon," and produced and directed "Maggie" for BBC Scotland.

As a director he worked on such shows as "Coronation Street," "Dr. Who" and "Grange Hill," which he also produced.

A native of Glasgow, McBain graduated from Harvard U., where he was president of the Dramatic Society in his senior year. Survived by his father and three sisters.