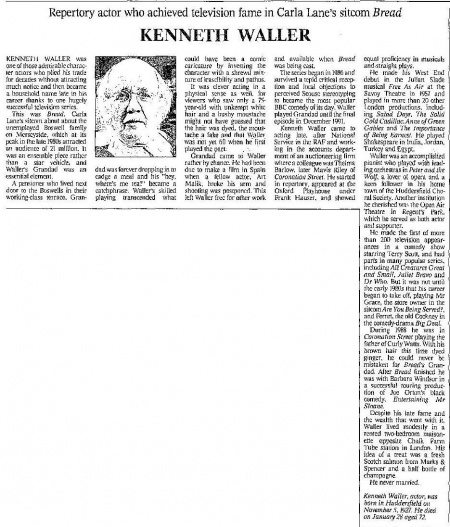 KENNETH WALLER was one of those admirable character actors who plied his trade for decades without attracting much notice and then became a household name late in his career thanks to one hugely successful television series.

This was Bread, Carla Lane's sitcom about about the unemployed Boswell family on Merseyside, which at its peak in the late 1980s attracted an audience of 21 million. It was an ensemble piece rather than a star vehicle, and Waller's Grandad was an essential element.

A pensioner who lived next door to the Boswells in their working-class terrace, Grandad was forever dropping in to cadge a meal and his "hey, where's me tea?" became a catchphrase. Waller's skilled playing transcended what could have been a comic caricature by investing the character with a shrewd mixture of irascibility and pathos.

It was clever acting in a physical sense as well, for viewers who saw only a 75-year-old with unkempt white hair and a bushy moustache might not have guessed that the hair was dyed, the moustache a fake and that Waller was not yet 60 when he first played the part.

Grandad came to Waller rather by chance. He had been due to make a film in Spain when a fellow actor, Art Malik, broke his arm and shooting was postponed. This left Waller free for other work and available when Bread was being cast.

The series began in 1986 and survived a tepid critical reception and local objections to perceived Scouse stereotyping to became the most popular BBC comedy of its day. Waller played Grandad until the final episode in December 1991.

Kenneth Waller came to acting late, after National Service in the RAF and working in the accounts department of an auctioneering firm where a colleague was Thelma Barlow, later Mavis Riley of Coronation Street. He started in repertory, appeared at the Oxford Playhouse under Frank Hauser, and showed equal proficiency in musicals and straight plays.

He made his West End debut in the Julian Slade musical Free As Air at the Savoy Theatre in 1957 and played in more than 20 other London productions, including Salad Days, The Solid Gold Cadillac, Anne of Green Gables and The Importance of Being Earnest. He played Shakespeare in India, Jordan, Turkey and Egypt.

Waller was an accomplished pianist who played with leading orchestras in Peter and the Wolf, a lover of opera and a keen follower in his home town of the Huddersfield Choral Society. Another institution he cherished was the Open Air Theatre in Regent's Park, which he served as both actor and supporter.

He made the first of more than 200 television appearances in a comedy show starring Terry Scott, and had parts in many popular series, including All Creatures Great and Small, Juliet Bravo and Dr Who. But it was not until the early 1980s that his career began to take off, playing Mr Grace, the store owner in the sitcom Are You Being Served?, and Ferret, the old Cockney in the comedy-drama Big Deal.

During 1988 he was in Coronation Street playing the father of Curly Watts. With his brown hair this time dyed ginger, he could never be mistaken for Bread's Grandad. After Bread finished he was with Barbara Windsor in a successful touring production of Joe Orton's black comedy, Entertaining Mr Sloane.

Despite his late fame and the wealth that went with it, Waller lived modestly in a rented two-bedroom maisonette opposite Chalk Farm Tube station in London. His idea of a treat was a fresh Scotch salmon from Marks & Spencer and a half bottle of champagne.