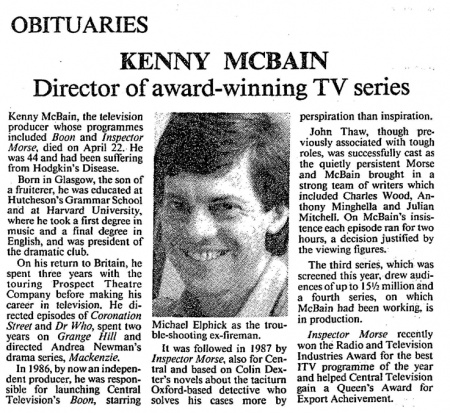 Kenny McBain, the television producer whose programmes included Boon and Inspector Morse, died on April 22. He was 44 and had been suffering from Hodgkin's Disease.

Born in Glasgow, the son of a fruiterer, he was educated at Hutcheson's Grammar School and at Harvard University, where he took a first degree in music and a final degree in English, and was president of the dramatic club.

On his return to Britain, he spent three years with the touring Prospect Theatre Company before making his career in television. He directed episodes of Coronation Street and Dr Who, spent two years on Grange Hill and directed Andrea Newman's drama series, Mackenzie.

In 1986, by now an independent producer, he was responsible for launching Central Television's Boon, starring Michael Elphick as the trouble-shooting ex-fireman.

It was followed in 1987 by Inspector Morse, also for Central and based on Colin Dexter's novels about the taciturn Oxford-based detective who solves his cases more by perspiration than inspiration.

John Thaw, though previously associated with tough roles, was successfully cast as the quietly persistent Morse and McBain brought in a strong team of writers which included Charles Wood, Anthony Minghella and Julian Mitchell. On McBain's insistence each episode ran for two hours, a decision justified by the viewing figures.

The third series, which was screened this year, drew audiences of up to 15 1/2 million and a fourth series, on which McBain had been working, is in production.

Inspector Morse recently won the Radio and Television Industries Award for the best ITV programme of the year and helped Central Television gain a Queen's Award for Export Acheivement.