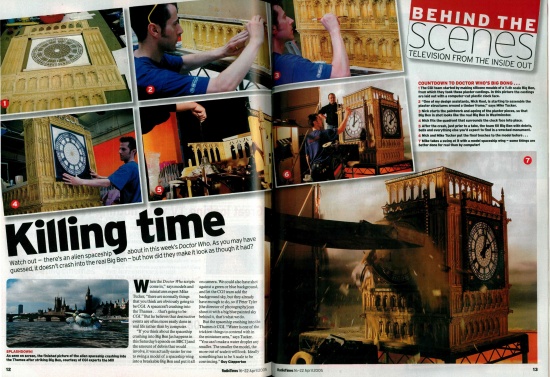 Watch out--there's an alien spaceship about in this week's Doctor Who. As you may have guessed, it doesn't crash into the real Big Ben--but how did they make it look as though it had?

When the Doctor Who scripts come in," says models and miniatures expert Mike Tucker, "there are normally things that you think are obviously going to be CGI. A spacecraft crashing into the Thames ... that's going to be CGI." But he believes that destructive events are often more easily done in real life rather than by computer.

"If you think about the spaceship crashing into Big Ben [as happens in this Saturday's episode on BBC1] and the amount of debris that would involve, it was actually easier for me to swing a model of a spaceship wing into a breakable Big Ben and put it all on camera. We could also have shot against a green or blue background, and let the CGI team add the background sky, but they already have enough to do, so if Peter Tyler [the director of photography] can shoot it with a big blue painted sky behind it, that's what we do.

But the spaceship crashing into the Thames is CGI. "Water is one of the trickiest things to contend with in the miniature area," says Tucker. "You can't make a water droplet any smaller. The smaller the model, the more out of scale it will look. Ideally something has to be 1/4 scale to be convincing."

COUNTDOWN TO DOCTOR WHO'S BIG BONG ...

1 The CGI team started by making silicone moulds of a 1/14th scale Big Ben, from which they took these plaster castings. In this picture the castings are laid out with a computer-cut plastic clock face.

2 "One of my design assistants, Nick Kool, is starting to assemble the plaster structures around a timber frame," says Mike Tucker.

3 Nick starts the paintwork and ageing of the plaster pieces, so that Big Ben in shot looks like the real Big Ben in Westminster.

4 Nick fits the quadrant that surrounds the clock face into place.

5 After the crash, just prior to a take, the team fill Big Ben with debris, bells and everything else you'd expect to find in a wrecked monument.

6 Nick and Mike Tucker put the final touches to the model before ...

7 Mike takes a swing at it with a model spaceship wing — some things are better done for real than by computer!

Caption: SPLASHDOWN! As seen on screen, the finished picture of the alien spaceship crashing into the Thames after striking Big Ben, courtesy of CGI experts the Mill