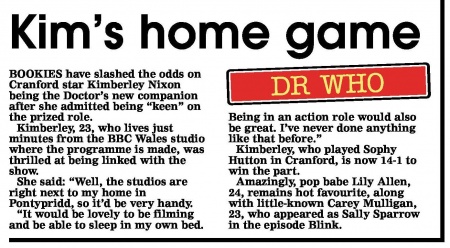 BOOKIES have slashed the odds on Cranford star Kimberley Nixon being the Doctor's new companion after she admitted being "keen" on the prized role.

Kimberley, 23, who lives just minutes from the BBC Wales studio where the programme is made, was thrilled at being linked with the show.

She said: "Well, the studios are right next to my home in Pontypridd, so it'd be very handy.

"It would be lovely to be filming and be able to sleep in my own bed. Being in an action role would also be great. I've never done anything like that before."

Kimberley, who played Sophy Hutton in Cranford, is now 14-1 to win the part.