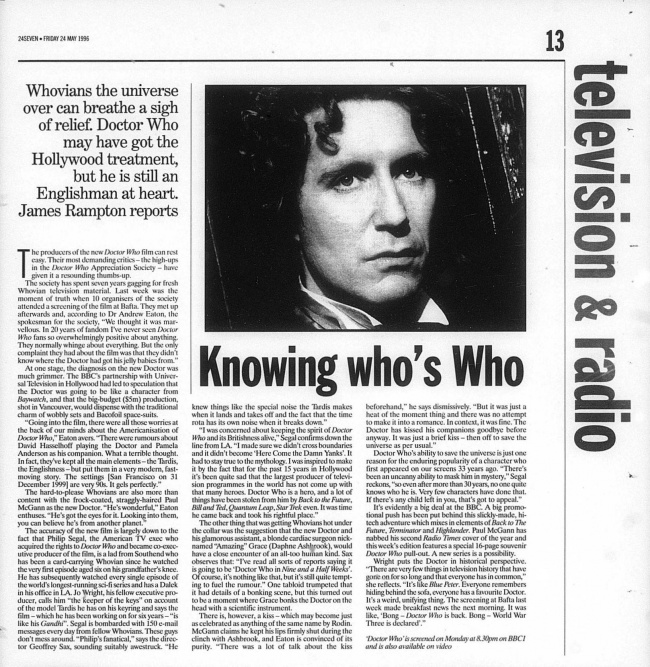 Whovians the universe over can breathe a sigh of relief. Doctor Who may have got the Hollywood treatment, but he is still an Englishman at heart.

The producers of the new Doctor Who film can rest easy. Their most demanding critics - the high-ups in the Doctor Who Appreciation Society - have given it a resounding thumbs-up.

The society has spent seven years gagging for fresh Whovian television material. Last week was the moment of truth when 10 organisers of the society attended a screening of the film at Bafta. They met up afterwards and, according to Dr Andrew Eaton, the spokesman for the society, "We thought it was marvellous. In 20 years of fandom I've never seen Doctor Who fans so overwhelmingly positive about anything. They normally whinge about everything. But the only complaint they had about the film was that they didn't know where the Doctor had got his jelly babies from."

At one stage, the diagnosis on the new Doctor was much grimmer. The BBC's partnership with Universal Television in Hollywood had led to speculation that the Doctor was going to be like a character from Baywatch, and that the big-budget ($ 5m) production, shot in Vancouver, would dispense with the traditional charm of wobbly sets and Bacofoil space-suits.

"Going into the film, there were all those worries at the back of our minds about the Americanisation of Doctor Who," Eaton avers. "There were rumours about David Hasselhoff playing the Doctor and Pamela Anderson as his companion. What a terrible thought. In fact, they've kept all the main elements - the Tardis, the Englishness - but put them in a very modern, fast-moving story. The settings San Francisco on 31 December 1999 are very 90s. It gels perfectly."

The hard-to-please Whovians are also more than content with the frockcoated, straggly-haired Paul McGann as the new Doctor. "He's wonderful," Eaton enthuses. "He's got the eyes for it. Looking into them, you can believe he's from another planet."

The accuracy of the new film is largely down to the fact that Philip Segal, the American TV exec who acquired the rights to Doctor Who and became co-executive producer of the film, is a lad from Southend who has been a card-carrying Whovian since he watched the very first episode aged six on his grandfather's knee. He has subsequently watched every single episode of the world's longest-running sci-fi series and has a Dalek in his office in LA. Jo Wright, his fellow executive producer, calls him "the keeper of the keys" on account of the model Tardis he has on his keyring and says the film - which he has been working on for six years - "is like his Gandhi". Segal is bombarded with 150 e-mail messages every day from fellow Whovians. These guys don't mess around. "Philip's fanatical," says the director Geoffrey Sax, sounding suitably awestruck. "He knew things like the special noise the Tardis makes when it lands and takes off and the fact that the time rota has its own noise when it breaks down."

"I was concerned about keeping the spirit of Doctor Who and its Britishness alive," Segal confirms down the line from LA. "I made sure we didn't cross boundaries and it didn't become 'Here Come the Damn Yanks'. It had to stay true to the mythology. I was inspired to make it by the fact that for the past 15 years in Hollywood it's been quite sad that the largest producer of television programmes in the world has not come up with that many heroes. Doctor Who is a hero, and a lot of things have been stolen from him by Back to the Future, Bill and Ted, Quantum Leap, Star Trek even. It was time he came back and took his rightful place."

The other thing that was getting Whovians hot under the collar was the suggestion that the new Doctor and his glamorous assistant, a blonde cardiac surgeon nicknamed "Amazing" Grace (Daphne Ashbrook), would have a close encounter of an all-too human kind. Sax observes that: "I've read all sorts of reports saying it is going to be 'Doctor Who in Nine and a Half Weeks'. Of course, it's nothing like that, but it's still quite tempting to fuel the rumour." One tabloid trumpeted that it had details of a bonking scene, but this turned out to be a moment where Grace bonks the Doctor on the head with a scientific instrument.

There is, however, a kiss - which may become just as celebrated as anything of the same name by Rodin. McGann claims he kept his lips firmly shut during the clinch with Ashbrook, and Eaton is convinced of its purity. "There was a lot of talk about the kiss beforehand," he says dismissively. "But it was just a heat of the moment thing and there was no attempt to make it into a romance. In context, it was fine. The Doctor has kissed his companions goodbye before anyway. It was just a brief kiss - then off to save the universe as per usual."

Doctor Who's ability to save the universe is just one reason for the enduring popularity of a character who first appeared on our screens 33 years ago. "There's been an uncanny ability to mask him in mystery," Segal reckons, "so even after more than 30 years, no one quite knows who he is. Very few characters have done that. If there's any child left in you, that's got to appeal."

It's evidently a big deal at the BBC. A big promotional push has been put behind this slickly-made, hi-tech adventure which mixes in elements of Back to The Future, Terminator and Highlander. Paul McGann has nabbed his second Radio Times cover of the year and this week's edition features a special 16-page souvenir Doctor Who pull-out. A new series is a possibility.

Wright puts the Doctor in historical perspective. "There are very few things in television history that have gone on for so long and that everyone has in common," she reflects. "It's like Blue Peter. Everyone remembers hiding behind the sofa, everyone has a favourite Doctor. It's a weird, unifying thing. The screening at Bafta last week made breakfast news the next morning. It was like, 'Bong - Doctor Who is back. Bong - World War Three is declared'."

'Doctor Who' is screened on Monday at 8.30pm on BBC1 and is also available on video