Koo Falls Out with Dr Who 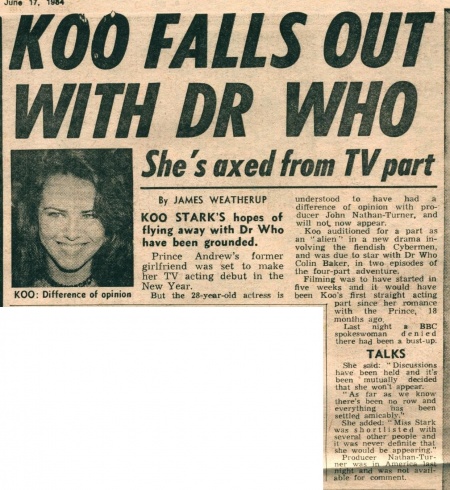 KOO STARK'S hopes of flying away with Dr Who have been grounded.

Prince Andrew's former girlfriend was set to make her TV acting debut in the New Year.

But the 28-year-old actress is understood to have had a difference of opinion with producer John Nathan-Turner, and will not now appear.

Koo auditioned for a part as an "alien" in a new drama involving the fiendish Cybermen, and was due to star with Dr Who Colin Baker, in two episodes of the four-part adventure.

Filming was to have started in five weeks and it would have been Koo's first straight acting part since her romance with the Prince, 18 months ago.

Last night a BBC spokeswoman denied there had been a bust-up.

She said: "Discussions have been held and it's been mutually decided that she won't appear.

"As far as we know there's been no row and everything has been settled amicably."

She added: "Miss Stark was shortlisted with several other people and it was never definite that she would be appearing."

Producer Nathan-Turner was in America last night and was not available for comment.