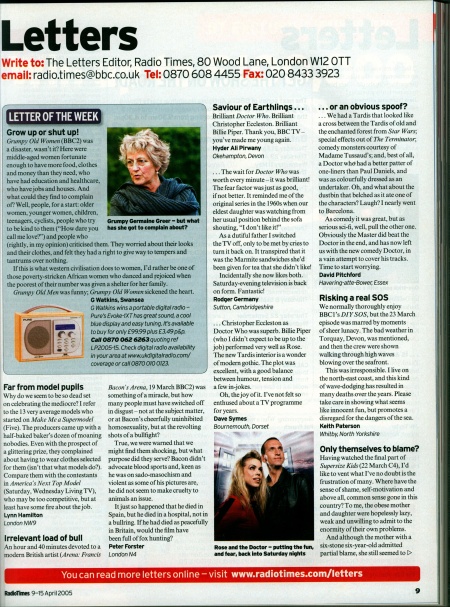 ... The wait for Doctor Who was worth every minute - it was brilliant! The fear factor was just as good, if not better. It reminded me of the original series in the 1960s when our eldest daughter was watching from her usual position behind the sofa shouting, "I don't like it!"

As a dutiful father I switched the TV off, only to be met by cries to turn it back on. It transpired that it was the Marmite sandwiches she'd been given for tea that she didn't like!

Incidentally she now likes both. Saturday-evening television is back on form. Fantastic!

... Christopher Eccleston as Doctor Who was superb. Billie Piper (who I didn't expect to be up to the job) performed very well as Rose. The new Tardis interior is a wonder of modern gothic. The plot was excellent, with a good balance between humour, tension and a few in-jokes.

Oh, the joy of it. I've not felt so enthused about a TV programme for years.

... We had a Tardis that looked like a cross between the Tardis of old and the enchanted forest from Star Wars; special effects out of The Terminator; comedy monsters courtesy of Madame Tussaud's; and, best of all, a Doctor who had a better patter of one-liners than Paul Daniels, and was as colourfully dressed as an undertaker. Oh, and what about the dustbin that belched as it ate one of the characters? Laugh? I nearly went to Barcelona.

As comedy it was great, but as serious sci-fi, well, pull the other one. Obviously the Master did beat the Doctor in the end, and has now left us with the new comedy Doctor, in a vain attempt to cover his tracks. Time to start worrying.

Caption: Rose and the Doctor - putting the fun, and fear, back into Saturday nights