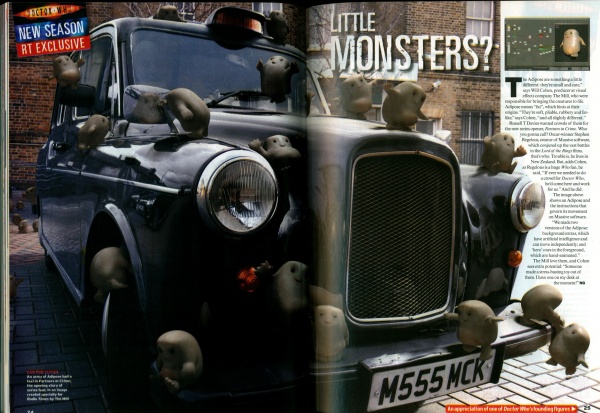 The Adipose are something a little different: they're small and cute," says Will Cohen, producer at visual effects company The Mill, who were responsible for bringing the creatures to life. Adipose means "fat", which hints at their origins. "They're soft, pliable, rubbery and fat-like," says Cohen, "and all slightly different." Russell T Davies wanted crowds of them for the new series opener, Partners in Crime. Who you gonna call? Oscar-winner Stephen Regelous, creator of Massive software, which conjured up the vast battles in the Lord of the Rings films, that's who. Trouble is, he lives in New Zealand. But, adds Cohen, as Regelous is a huge Who fan, he said, "If ever we needed to do a crowd for Doctor Who, he'd come here and work for us." And he did.

The image above shows an Adipose and the instructions that govern its movement on Massive software. "We made two versions of the Adipose: background extras, which have artificial intelligence and can move independently; and 'hero' ones in the foreground, which are hand-animated."

The Mill love them, and Cohen sees extra potential: "Someone made a stress-busting toy out of them. I have one on my desk at the moment!"

Cab for cuties: An army of Adipose hail a taxi in Partners in Crime, the opening story of series four, in an image created specially for Radio Times by The Mill.