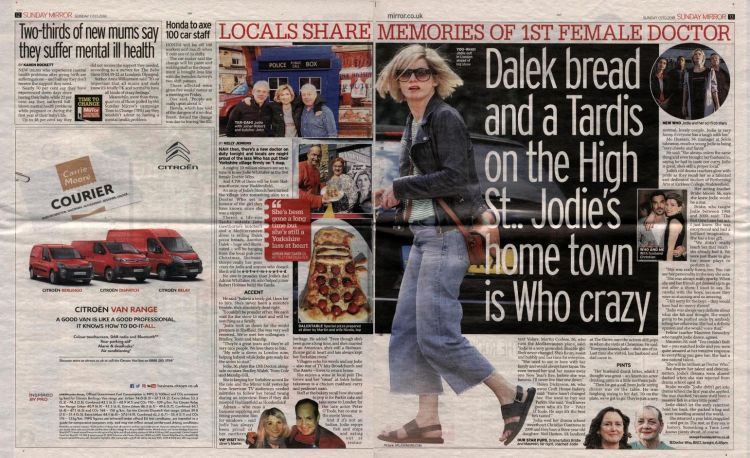 NAH then, there's a new doctor on duty tonight and locals are reight proud of the lass Who has put their Yorkshire village firmly on 't map.

A mighty 10 million viewers are set to tune in to see Jodie Whittaker as the first female Doctor Who.

And 4,198 of them will be from Skelmanthorpe, near Huddersfield.

An army of Jodie's friends have turned the village into something akin to a Doctor Who set in honour of the girl they have known since she was a nipper.

There's a life-size Tardis outside John Gawthorne's butcher's and a Mediterranean diner is selling Dalek pizza breads. Another Dalek - huge and illuminated - will be hanging from the local pub over Christmas. Skelmanthorpe really has gone crazy for Jodie and anyone who doesn't like it will be e-x-t-e-r-m-i-n-a-t-e-d.

No one is prouder than Jodie's dad Adrian Whittaker, 68, who helped joiner Robert Holmes build the Tardis.

He said: "Jodie is a lovely girl, I love her to bits. She's never been a minute's trouble, she's absolutely dead right.

"I couldn't be prouder of her. We can't wait for the show to start and will be watching as a family.

"Jodie took us down for the world premiere in Sheffield. She was very well received. We've met her colleagues - Bradley, Tosin and Mandip.

"They're a great team and they're all very nice people. We love them to bits.

"My wife is down in London now, helping babysit while Jodie gets ready for the series to start'

She is keeping her Yorkshire accent for the role and the Mirror told yesterday how American TV audiences needed subtitles to follow her broad twang during an interview. Even if they did misspell Huddersfield as Hoodezfield!

heritage. He added: "Even though she's been gone a long time, and she's married to an American, she's still a Skelmanthorpe girl at heart and has always kept her Yorkshire roots:'

Villagers echo his words and say Jodie - also star of TV hits Broadchurch and The Assets - loves to return home.

She enjoys a wine in local pub The Grove and her "usual" at Solo's Indian takeaway is a chicken makhani curry and peshwari naan.

Staff at the bakery recall how she used to pop in for Parkin cake and take some to London for the late actor Peter O'Toole, her co-star in the movie Venus.

And if it's not an Indian, Jodie enjoys fish and chips and eating out at restaurant Volare. Martin Corless, 56, who runs the Mediterranean place, said: "Jodie is a very grounded, likeable girl. She's never changed. She's funny, sweet and bubbly and has time for everyone.

"She used to eat in here with her family and would always have tapas. We even turned her and her mates away one New Year's Eve, before she was famous. I'll never live that one down: Helen Dickinson, 66, who owns Croft House Bakery, said: "Fame hasn't changed her. She used to buy our Parkin. She said, 'You'll never guess who it's 'for - Peter O'Toole. He says it's the best he's tasted':'

Jodie wed her drama school sweetheart Christian Contreras in 2008 and they have a three-year-old daughter. Neil Hutton, 53, landlord at The Grove, says the actress still pops in when she visits at Christmas. He said: "Everyone knows Jodie - she's one of us. Last time she visited, her husband and dad came in.

"Her husband drank bitter, which I thought was great - an American actor drinking pints in a little northern pub.

"Then he got a call from Jodie saying dinner was on the table. He was laughing, saying to her dad, 'It's on the plate, we've got to go: They're just a very normal, lovely couple. Jodie is very funny. Everyone has a laugh with her:'

Mo Hussain, 34, manager at Solo's takeaway, recalls a young Jodie as being "very cheeky and funny .

He said: "She always orders the same thing and even brought her husband in, saying he had to taste our curry. Jodie is great, she's still a proper local.

Jodie's old drama teachers glow with pride as they recall her as a talented and dedicated student of Performing Arts at Kirklees College, Huddersfield.

Her acting teacher Bridle Moore, 56, says she knew Jodie would be a star.

Bridie, who taught Jodie between 1998 and 2000, said: "The first time 1§aw her act, I just knew. She was exceptional and had a brilliant imagination. She has a true gift.

"We didn't really teach her that much she already had it. We were just there to give her more plays to perform in.

"She was really funny, too. You can see her personality in the way she acts.

"She was always really sparky. When she and her friends got dressed up to go out after a show, I used to say, 'Be careful with the boys: because they were so stunning and so amazing.

"I felt sorry for the boys - they would have had no mercy shown!

"Jodie was always very definite about what she felt and thought. She wasn't going to be pushed aside by anybody telling her otherwise. She had a definite opinion and she would voice that."

Maureen, 65, said: "You couldn't fault her - you watched Jodie and you were quite amazed at her intuitive response to everything you gave her. She had a raw natural talent.

"She will be brilliant as Doctor Who."

But despite her talent and determination, Jodie's dreams were almost dashed when she was rejected from drama school aged 18.

Bridle recalls: "Jodie didn't get into drama school the first year she applied. She was shocked, because she'd been a massive fish in a tiny little pond:'

Jodie didn't let the early rejection hold her back. She packed a bag and went travelling around the world. She returned a year later, reapplied - and got in. The rest, as they say, is history. Something a Time Lord knows plenty about, of course.

WHO AND ME With husband Christian

NEW WHO Jodie and her sci-fi co-stars

YOO-WHO! Jodie out in London ahead of big show