Lolita takes on the Daleks 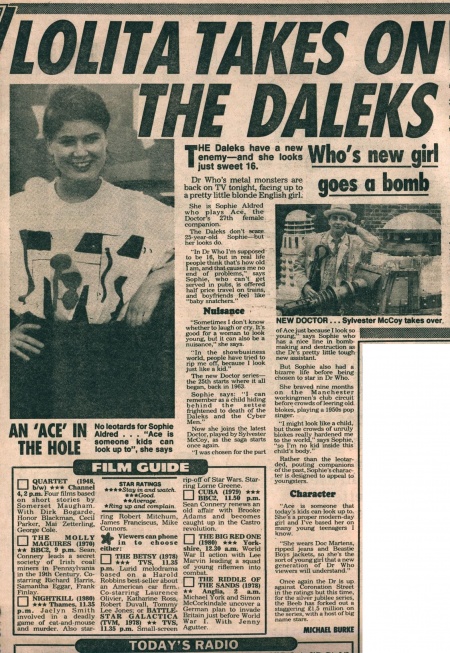 Who's new girl goes a bomb

THE Daleks have a new enemy—and she looks just sweet 16.

Dr Who's metal monsters are back on TV tonight, facing up to a pretty little blonde English girl.

She is Sophie Aldred who plays Ace, the Doctor's 27th female companion.

The Daleks don't scare 25-year-old Sophie—but her looks do.

"In Dr Who I'm supposed to be 16, but in real life people think that's how old I am, and that causes me no end of problems," says Sophie, who can't get served in pubs, is offered half price travel on trains, and boyfriends feel like "baby snatchers."

"Sometimes I don't know whether to laugh or cry. It's good for a woman to look young, but it can also be a nuisance," she says.

"In the showbusiness world, people have tried to rip me off, because I look just like a kid."

The new Doctor series—the 25th starts where it all began, back in 1963.

Sophie says: "I can remember as a child hiding behind the settee frightened to death of the Daleks and the Cyber Men."

Now she joins the latest Doctor, played by Sylvester McCoy, as the saga starts once again.

"I was chosen for the part of Ace just because I look so young," says Sophie who, has a nice line in bomb-making and destruction as the Dr's pretty little tough new assistant.

But Sophie also had a bizarre life before being chosen to star in Dr Who.

"I might look like a child, but those crowds of unruly blokes really hardened me to the world," says Sophie, "so I'm no kid inside this child's body."

Rather than the leotarded, pouting companions of the past, Sophie's character is designed to appeal to youngsters.

"Ace is someone that today's kids can look up to. She's a proper modern-day girl and I've based her on many young teenagers I know.

"She wears Doc Martens, ripped jeans and Beastie Boys jackets, so she's the sort of young girl that a new generation of Dr Who viewers will understand."

Once again the Dr is up against Coronation Street in the ratings but this time, for the silver jubilee series, the Beeb has forked out a staggering £1.5 million on the series, with a host of big name stars.

AN 'ACE' IN THE HOLE No leotards for Sophie Aldred ... "Ace is someone kids can look up to", she says