Long-lost Doctor Who episodes back at BBC 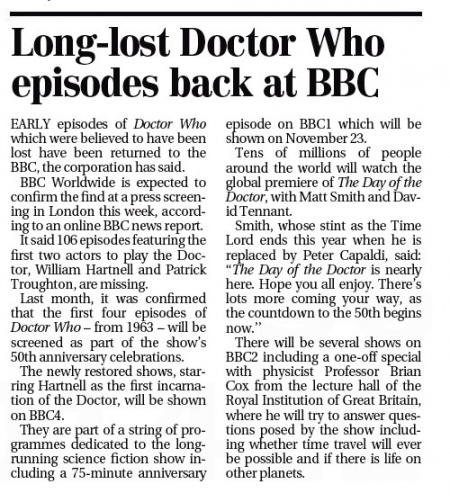 EARLY episodes of Doctor Who which were believed to have been lost have been returned to the BBC, the corporation has said.

BBC Worldwide is expected to confirm the find at a press screening in London this week, according to an online BBC news report.

It said 106 episodes featuring the first two actors to play the Doctor, William Hartnell and Patrick Troughton, are missing.

Last month, it was confirmed that the first four episodes of Doctor Who – from 1963 – will be screened as part of the show's 50th anniversary celebrations.

The newly restored shows, starring Hartnell as the first incarnation of the Doctor, will be shown on BBC4.

They are part of a string of programmes dedicated to the long-running science fiction show including a 75-minute anniversary episode on BBC1 which will be shown on November 23.

Tens of millions of people around the world will watch the global premiere of The Day of the Doctor, with Matt Smith and David Tennant.

Smith, whose stint as the Time Lord ends this year when he is replaced by Peter Capaldi, said: "The Day of the Doctor is nearly here. Hope you all enjoy. There's lots more coming your way, as the countdown to the 50th begins now."

There will be several shows on BBC2 including a one-off special with physicist Professor Brian Cox from the lecture hall of the Royal Institution of Great Britain, where he will try to answer questions posed by the show including whether time travel will ever be possible and if there is life on other planets.