Look Who's Doctor No 8 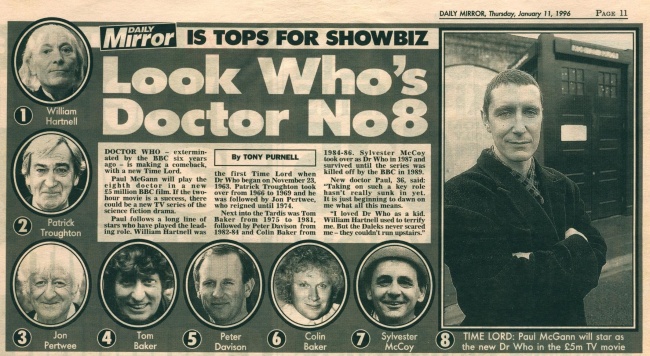 DOCTOR WHO - exterminated by the BBC six years ago - is making a comeback, with a new Time Lord.

Paul McGann will play the eighth doctor in a new £5 million BBC film. If the two-hour movie is a success, there could be a new TV series of the science fiction drama.

Paul follows a long line of stars who have played the leading role. William Hartnell was the first Time Lord when Dr Who began on November 23, 1963. Patrick Troughton took over from 1966 to 1969 and he was followed by Jon Pertwee, who reigned until 1974.

New doctor Paul, 36, said: "Taking on such a key role hasn't really sunk in yet. It is just beginning to dawn on me what all this means.

"I loved Dr Who as a kid. William Hartnell used to terrify me. But the Daleks never scared me - they couldn't run upstairs."

Caption: TIME LORD: Paul McGann will star as the new Dr Who in the £5m TV movie