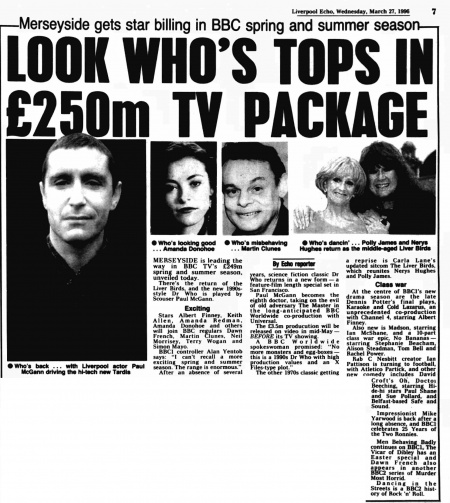 Merseyside gets star billing in BBC spring and summer season

There's the return of the Liver Birds, and the new 1990s-style Dr Who is played by Scouser Paul McGann.

BBC' controller Alan Yentob says: "I can't recall a more exciting spring and summer season. The range is enormous." After an absence of several ears, science fiction classic Dr Who returns in a new form — a feature-film length special set in San Francisco.

Paul McGann becomes the eighth doctor, taking on the evil of old adversary The Master in the long-anticipated BBC Worldwide co-production with Universal.

The £3.5m production will be released on video in mid-May — BEFORE its TV showing.

A BBC Worldwide spokeswoman promised: "No more monsters and egg-boxes — this is a 1990s Dr Who with high production values and an X Files-type plot."

The other 1970s classic getting a reprise is Carla Lane's updated sitcom The Liver Birds, which reunites Nerys Hughes and Polly James.

Impressionist Mike Yarwood is back after a long absence, and BBC1 celebrates 25 Years of the Two Ronnies.

Men Behaving Badly continues on BBC1, The Vicar of Dibley has an Easter special and Dawn French also appears in another BBC2 series of Murder Most Horrid.

Dancing in the Streets is a BBC2 history of Rock 'n' Roll.

Caption: Who's back ... with Liverpool actor Paul McGann driving the hi-tech new Tardis