Look Who's in line for a best actress award 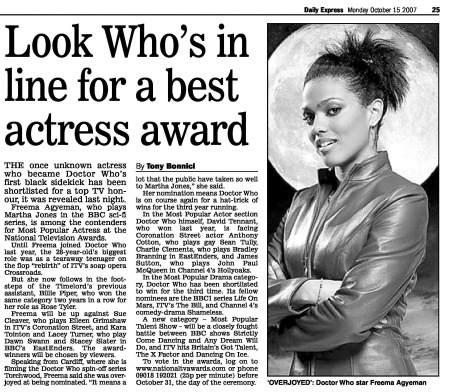 THE once unknown actress who became Doctor Who's first black sidekick has been shortlisted for a top TV honour, it was revealed last night.

Freema Agyeman, who plays Martha Jones in the BBC sci-fi series, is among the contenders for Most Popular Actress at the National Television Awards.

Until Freema joined Doctor Who last year, the 28-year-old's biggest role was as a tearaway teenager on the flop "rebirth" of ITV's soap opera Crossroads.

But she now follows in the footsteps of the Timelord's previous assistant, Billie Piper, who won the same category two years in a row for her role as Rose Tyler.

Freema will be up against Sue Cleaver, who plays Eileen Grimshaw in ITV's Coronation Street, and Kara Tointon and Lacey Turner, who play Dawn Swann and Stacey Slater in BBC's EastEnders. The award-winners will be chosen by viewers.

Speaking from Cardiff, where she is filming the Doctor Who spin-off series Torchwood, Freema said she was overjoyed at being nominated. "It means a lot that the public have taken so well to Martha Jones," she said.

Her nomination means Doctor Who is on course again for a hat-trick of wins for the third year running.

In the Most Popular Drama category, Doctor Who has been shortlisted to win for the third time. Its fellow nominees are the BBC1 series Life On Mars, ITV's The Bill, and Channel 4's comedy-drama Shameless.

A new category - Most Popular Talent Show - will be a closely fought battle between BBC shows Strictly Come Dancing and Any Dream Will Do, and ITV hits Britain's Got Talent, The X Factor and Dancing On Ice.