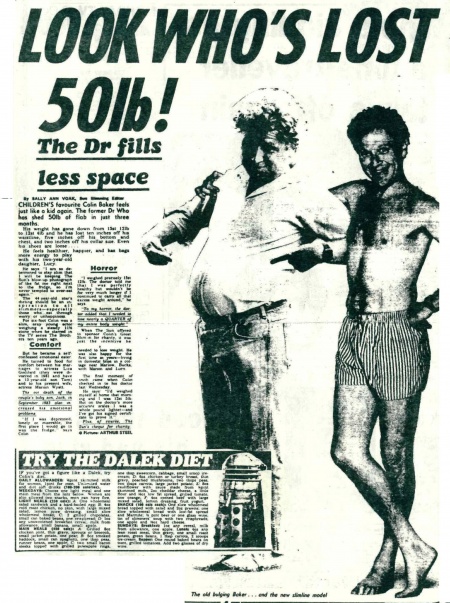 Children's favorite Colin Baker feels just like a kid again. The former Dr. Who has shed 50lb of flab in just three months.

He feels healthier, happier, and has bags more energy to play with his two-year-old daughter, Lucy.

He says: "I am so determined to stay slim that I will be keeping The Sun's blow-up photograph of the fat me right next to the fridge, so I'm never tempted to overeat again."

For six-foot Colin was a slim, sexy young actor weighing a steady 11 1/2st when he starred in the TV series The Brothers 10 years ago.

But he became a self-confessed emotional eater.

He turned to food for comfort between his marriages to actress Liza Goddard (they were divorced in 1981 and have a 13-year-old son Tom) and to his present wife, actress Marion Wyatt.

The cot death of the couple's baby son, Jack, in September 1983 also increased his emotional problems.

If I was depressed, lonely were miserable, the first place I would go too was the fridge, says Colin.

"I weighed precisely 15st 12lb. The doctor told me that I was perfectly healthy but would be for very much longer if I continue to carry all the excess weight around," he says.

"To my horror, the doctor added that I needed to lose nearly a quarter of my entire body weight."

When The Sun offered a sponsor Colin's Great Slimming for charity, it was just the incentive he needed to lose weight. He was also happy for the first time in years living in domestic bliss in a cottage near Marlow, Bucks, with Marion and Lucy.

The final moments of truth came when Colin checked into his doctor last Wednesday.

He says: "I'd weighed myself at home that morning and I was 12st 5lb. But on the doctor's more accurate scales I was a whole pound lighter and I've got his signed certificates to prove it.

Plus, of course, The Sun's check for charity.

Caption: The old bulging Baker ... and the new slimline model