Look who's being revived 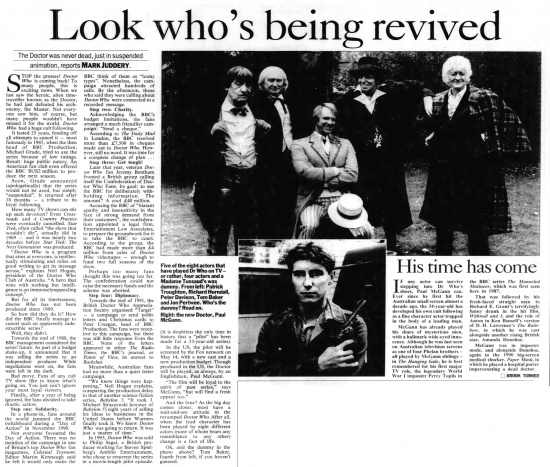 STOP the presses! Doctor Who is coming back! To many people, this is exciting news. When we last saw the heroic, alien time-traveller known as the Doctor, he had just defeated his archenemy, the Master. Not everyone saw him, of course, but many people wouldn't have missed it for the world. Doctor Who had a huge cult following.

It lasted 25 years, fending off all attempts to cancel it - most famously in 1985, when the then head of BBC Production, Michael Grade, tried to axe the series because of low ratings. Result: huge public outcry. An American fan club even offered the BBC $US2 million to produce the next season.

Soon, Grade announced (apologetically) that the series would not be axed, but simply "suspended". It returned after 18 months - a tribute to its loyal following.

How many TV shows can stir up such devotion? Even Crossroads and A Country Practice were eventually cancelled. Star Trek, often called "the show that wouldn't die", actually did in 1969 - and it was nearly two decades before Star Trek: The Next Generation was produced.

"Doctor Who is a program that aims at everyone, is intellectually stimulating and relies on good writing to get its message across," explains Neil Hogan, president of the Doctor Who Club of Australia. "A hero that wins with nothing but intelligence is an immensely appealing concept."

But for all its timelessness, Doctor Who has not been produced since 1989.

So how did they do it? How did the BBC finally manage to cancel such an apparently indestructible series?

Towards the end of 1988, the BBC management considered the series' future. As part of a budget shake-up, it announced that it was selling the series to an independent producer. While negotiations went on, the fans were left in the dark.

Bad move. Fans of any cult TV show like to know what's going on. You just can't ignore your most loyal viewers.

Finally, after a year of being ignored, the fans decided to take drastic action.

In a phone-in, fans around the world jammed the BBC switchboard during a "Day of Action" in November 1990.

Not everyone favoured the Day of Action. There was no mention of the campaign in one of Britain's top Doctor Who fan magazines, Celestial Toyroom. Editor Martin Kennaugh said he felt it would only make the BBC think of them as "loony types". Nonetheless, the campaign attracted hundreds of calls. By the afternoon, those who said they were calling about Doctor Who were connected to a recorded message.

Acknowledging the BBC's budget limitations, the fans arranged a much friendlier campaign: "Send a cheque."

According to The Daily Mail in London, the BBC received more than ¤7,500 in cheques made out to Doctor Who. However, still no word. It was time for a complete change of plan ...

Later that year, veteran Doctor Who fan Jeremy Bentham fronted a British group calling itself the Confederation of Doctor Who Fans. Its goal: to sue the BBC for deliberately withholding information. The amount? A cool ¤40 million.

Accusing the BBC of "blatant apathy and insensitivity in the face of strong demand from their customers", the confederation appointed a legal firm, Entertainment Law Associates, to prepare the groundwork for it to take the BBC to court. According to the group, the BBC had made more than ¤4 million from sales of Doctor Who videotapes - enough to fund two full seasons of the show.

Perhaps too many fans thought this was going too far. The confederation could not raise the necessary funds and the scheme was aborted.

Towards the end of 1991, the British Doctor Who Appreciation Society organised "Target" - a campaign to send polite letters and Christmas cards to Peter Creegan, head of BBC Production. The fans were receptive to this campaign, but there was still little response from the BBC. None of the letters appeared in either The Radio Times, the BBC's journal, or Points of View, its answer to Backchat.

Meanwhile, Australian fans had no more than a quiet letter campaign.

"We knew things were happening," Neil Hogan explains, comparing the production delay to that of another science fiction series, Babylon 5. "It took J. Michael Straczynski (creator of Babylon 5) eight years of selling his ideas to businesses in the United States before Warners finally took it. We knew Doctor Who was going to return. It was just a matter of time."

In 1993, Doctor Who was sold to Philip Segal, a British producer working for Steven Spielberg's Amblin Entertainment, who chose to resurrect the series in a movie-length pilot episode. (It is doubtless the only time in history that a "pilot" has been made for a 33-year-old series).

In the US, the pilot will be screened by the Fox network on May 14, with a new cast and a new production budget. Though produced in the US, the Doctor will be played, as always, by an Englishman, Paul McGann.

"The film will be loyal to the spirit of past series," says McGann, "but will find a fresh appeal too."

And the fans? As the big day comes closer, most have a wait-and-see attitude to the revamped Doctor Who. After all, when the lead character has been played by eight different actors (none of whom bears any resemblance to any other) change is a fact of life.

Oh, and the dummy in the photo above? Tom Baker, fourth from left, if you haven't guessed.

GRAPHIC: Two illus: Five of the eight actors that have played Dr Who on TV - or rather, four actors and a Madame Tussaud's wax dummy. From left: Patrick Troughton, Richard Hurndall, Peter Davison, Tom Baker and Jon Pertwee. Who's the dummy? Read on. Right: the new Doctor, Paul McGann.