Looking back at a quirky, cool Doctor 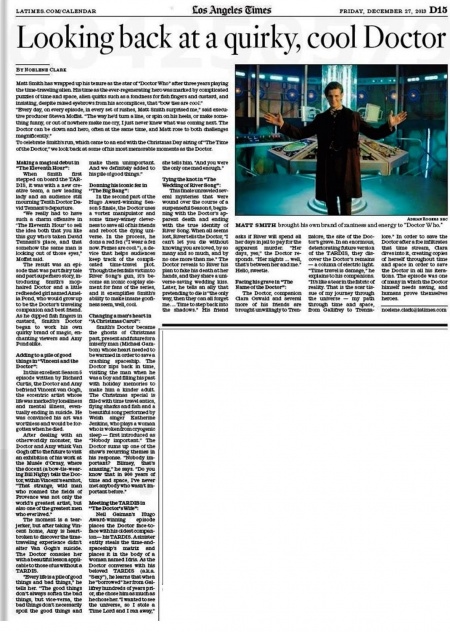 Matt Smith has wrapped up his tenure as the star of "Doctor Who" after three years playing the time-traveling alien. His time as the ever-regenerating hero was marked by complicated puzzles of time and space, alien quirks such as a fondness for fish fingers and custard, and insisting, despite raised eyebrows from his accomplices, that "bow ties are cool." "Every day, on every episode, in every set of rushes, Matt Smith surprised me," said executive producer Steven Moffat. "The way he'd turn a line, or spin on his heels, or make something funny, or out of nowhere make me cry, I just never knew what was coming next. The Doctor can be clown and hero, often at the same time, and Matt rose to both challenges magnificently." To celebrate Smith's run, which came to an end with the Christmas Day airing of "The Time of the Doctor," we look back at some of his most memorable moments as the Doctor.

BBC brought his own brand of zaniness and energy to "Doctor Who."

Making a magical debut in "The Eleventh Hour":

When Smith first stepped on board the TARDIS, it was with a new creative team, a new leading lady and an audience still mourning Tenth Doctor David Tennant's departure.

"We really had to have such a charm offensive in 'The Eleventh Hour' to sell the idea both that you like this guy who's taken David Tennant's place, and that somehow the same man is looking out of those eyes," Moffat said.

The result was an episode that was part fairy tale and part superhero story, introducing Smith's mophaired Doctor and a little redheaded girl named Amelia Pond, who would grow up to be the Doctor's traveling companion and best friend. As he dipped fish fingers in custard, Smith's Doctor began to work his own quirky brand of magic, enchanting viewers and Amy Pond alike.

Adding to a pile of good things in "Vincent and the Doctor":

In this excellent Season 5 episode written by Richard Curtis, the Doctor and Amy befriend Vincent van Gogh, the eccentric artist whose life was marked by loneliness and mental illness, eventually ending in suicide. He was convinced his art was worthless and would be forgotten when he died.

After dealing with an otherworldly monster, the Doctor and Amy whisk Van Gogh off to the future to visit an exhibition of his work at the Musée d'Orsay, where the docent (a bow-tie-wearing Bill Nighy) tells the Doctor, within Vincent's earshot, "That strange, wild man who roamed the fields of Provence was not only the world's greatest artist, but also one of the greatest men who ever lived."

The moment is a tearjerker, but after taking Vincent home, Amy is heartbroken to discover the timetraveling experience didn't alter Van Gogh's suicide. The Doctor consoles her with a beautiful lesson applicable to those of us without a TARDIS.

Donning his iconic fez in "The Big Bang":

In the second part of the Hugo Award-winning Season 5 finale, the Doctor uses a vortex manipulator and some timey-wimey cleverness to save all of his friends and reboot the dying universe. In the process, he dons a red fez ("I wear a fez now. Fezzes are cool."), a device that helps audiences keep track of the complicated time-travel plot. Though the fez falls victim to River Song's gun, it's become an iconic cosplay element for fans of the series, and it exemplifies Smith's ability to make insane goofiness seem, well, cool.

Changing a man's heart in "A Christmas Carol":

Smith's Doctor became the ghosts of Christmas past, present and future for a miserly man (Michael Gambon) whose heart needed to be warmed in order to save a crashing spaceship. The Doctor zips back in time, visiting the man when he was a boy and filling his past with holiday memories to make him a kinder adult. The Christmas special is filled with time travel antics, f lying sharks and fish and a beautiful song performed by Welsh singer Katherine Jenkins, who plays a woman who is woken from cryogenic sleep — first introduced as "Nobody important." The Doctor sums up one of the show's recurring themes in his response. "Nobody important? Blimey, that's amazing," he says. "Do you know that in 900 years of time and space, I've never met anybody who wasn't important before."

Meeting the TARDIS in "The Doctor's Wife":

Neil Gaiman's Hugo Award-winning episode places the Doctor face-toface with his oldest companion — his TARDIS. A sinister entity steals the time-andspaceship's matrix and places it in the body of a woman named Idris. As the Doctor converses with his beloved TARDIS (a.k.a. "Sexy"), he learns that when he "borrowed" her from Gallifrey hundreds of years prior, she chose him as much as he chose her. "I wanted to see the universe, so I stole a Time Lord and I ran away," she tells him. "And you were the only one mad enough."

Tying the knot in "The Wedding of River Song":

This finale unraveled several mysteries that were wound over the course of a suspenseful Season 6, beginning with the Doctor's apparent death and ending with the true identity of River Song. When all seems lost, River tells the Doctor, "I can't let you die without knowing you are loved, by so many and so much, and by no one more than me." The Doctor reveals to River his plan to fake his death at her hands, and they share a universe-saving wedding kiss. Later, he tells an ally that pretending to die is "the only way, then they can all forget me. … Time to step back into the shadows." His friend asks if River will spend all her days in jail to pay for the apparent murder. "Her days, yes," the Doctor responds. "Her nights … well, that's between her and me." Hello, sweetie.

Facing his grave in "The Name of the Doctor":

The Doctor, companion Clara Oswald and several more of his friends are brought unwillingly to Trenzalore, the site of the Doctor's grave. In an enormous, deteriorating future version of the TARDIS, they discover the Doctor's remains — a column of electric light. "Time travel is damage," he explains to his companions. "It's like a tear in the fabric of reality. That is the scar tissue of my journey through the universe — my path through time and space, from Gallifrey to Trenzalore." In order to save the Doctor after a foe infiltrates that time stream, Clara dives into it, creating copies of herself throughout time and space in order to save the Doctor in all his iterations. The episode was one of many in which the Doctor himself needs saving, and humans prove themselves heroes.