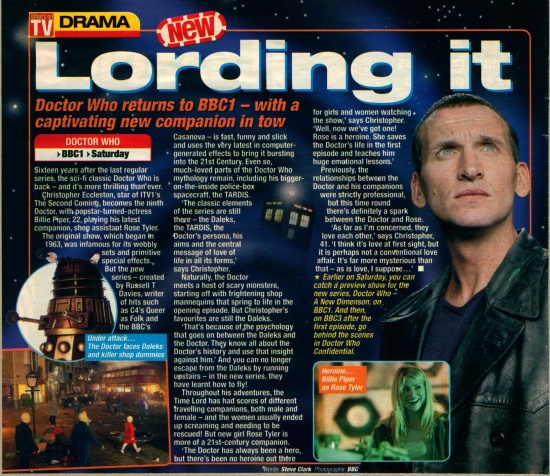 Sixteen years after the last regular series, the sci-fi classic Doctor Who is back - and it's more thrilling than ever.

The original show, which began in 1963, was infamous for its wobbly sets and primitive special effects. But the new series - created by Russell T Davies, writer of hits such as C4's Queer as Folk and the BBC's Casanova - is fast, funny and slick and uses the very latest in computer-generated effects to bring it bursting into the 21st Century. Even so, much-loved parts of the Doctor Who mythology remain, including his bigger-on-the-inside police-box spacecraft, the TARDIS.

'The classic elements of the series are still there - the Daleks, the TARDIS, the Doctor's persona, his aims and the central message of love of life in all its forms,' says Christopher.

Naturally. the Doctor meets a host of scary monsters, starting off with frightening shop mannequins that spring to life in the opening episode. But Christopher's favourites are still the Daleks.

'That's because of the psychology that goes on between the Daleks and the Doctor. They know all about the Doctor's history and use that insight against him.' And you can no longer escape from the Daleks by running upstairs - in the new series, they have learnt how to fly!

Throughout his adventures, the Time Lord has had scores of different travelling companions, both male and female - and the women usually ended up screaming and needing to be rescued! But new girl Rose Tyler is more of a 21st-century companion.

'The Doctor has always been a hero, but there's been no heroine out there for girls and women watching the show,' says Christopher. 'Well, now we've got one! Rose is a heroine. She saves the Doctor's life in the first episode and teaches him huge emotional lessons.'

'As far as I'm concerned, they love each other,' says Christopher, 41. 'I think it's love at first sight, but it is perhaps not a conventional love affair. It's far more mysterious than that - as is love, I suppose...' * Earlier on Saturday, you can catch a preview show for the new series, Doctor Who - A New Dimenson, on BBC1. And then, on BBC3 after the first episode, go behind the scenes in Doctor Who Confidential.