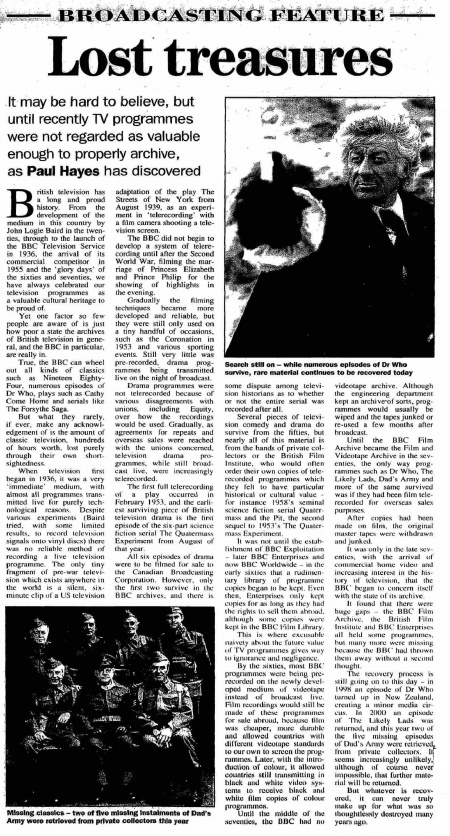 It may be hard to believe, but until recently TV programmes were not regarded as valuable enough to properly archive, as Paul Hayes has discovered

British television has a long and proud history. From the development of the medium in this country by John Logic Baird in the twenties, through to the launch of the BBC Television Service in 1936, the arrival of its commercial competitor in 1955 and the 'glory days' of the sixties and seventies, we have always celebrated our television programmes as a valuable cultural heritage to be proud of.

Yet one factor so few people are aware of is just how poor a state the archives of British television in general, and the BBC in particular, are really in.

True, the BBC can wheel out all kinds of classics such as Nineteen Eighty-Four, numerous episodes of Dr Who, plays such as Cathy Come Home and serials like The Forsythe Saga.

But what they rarely, if ever, make any acknowledgement of is the amount of classic television, hundreds of hours worth, lost purely through their own shortsightedness.

When television first began in 1936, it was a very 'immediate' medium, with almost all programmes transmitted live for purely technological reasons. Despite various experiments (Baird tried, with some limited results, to record television signals onto vinyl discs) there was no reliable method of recording a live television programme. The only tiny fragment of pre-war television which exists anywhere in the world is a silent, six-minute clip of a US television adaptation of the play The Streets of New York from August 1939, as an experiment in 'telerecording' with a film camera shooting a television screen.

The BBC did not begin to develop a system of telerecording until after the Second World War, filming the marriage of Princess Elizabeth and Prince Philip for the showing of highlights in the evening.

Gradually the filming techniques became more developed and reliable, but they were still only used on a tiny handful of occasions, such as the Coronation in 1953 and various sporting events. Still very little was pre-recorded, drama programmes being transmitted live on the night of broadcast.

Drama programmes were not telerecorded because of various disagreements with unions, including Equity, over how the recordings would he used. Gradually, as agreements for repeats and overseas sales were reached with the unions concerned, television drama programmes, while still broadcast live, were increasingly telerecorded.

The first full telcrecording of a play occurred in February 1953, and the earliest surviving piece of British television drama is the first episode of the six-part science fiction serial The Quatermass Experiment from August of that year.

All six episodes of drama were to be filmed for sale to the Canadian Broadcasting Corporation. However, only the first two survive in the BBC archives, and there is some dispute among television historians as to whether or not the entire serial was recorded after all.

Several pieces of television comedy and drama do survive from the fifties, but nearly all of this material is from the hands of private collectors or the British Film Institute, who would often order their own copies of telerecorded programmes which They fell to have particular historical or cultural value for instance 1958's seminal science fiction serial Quatermass and the Pit, the second sequel to 1953's The Quatermass Experiment.

It was not until the establishment of BBC Exploitation - later BBC Enterprises and now BBC Worldwide - in the early sixties that a rudimentary library of programme rumples began to he kept. Even then, Enterprises only kept copies for as long as they had the rights to sell them abroad, although some copies were kept in the BBC Film Library.

This is where excusable naivety about the future value of TV programmes gives wily to ignorance and negligence.

By the sixties, most BBC programmes were being prerecorded on the newly developed medium of videotape instead of broadcast live. Film recordings would still be made of these programmes for sale abroad, because film was cheaper, more durable and allowed countries with different videotape standards to our own to screen the programmes, Later, with the introduction of colour, it allowed countries still transmitting in black and white video systems to receive black and white film copies of colour programmes.

Until the middle of the seventies, the BBC had no videotape archive. Although the engineering department kept an archive of sorts, programmes would usually be wiped and the tapes junked or re-used a few months after broadcast.

Until the BBC Film Archive became the Film and Videotape Archive in the seventies, the only way programmes such as Dr Who, The Likely Lads, Dad's Army and more of the same survived was if they had been film telerecorded for overseas sales purposes.

After copies had been made on film, the original master tapes were withdrawn and junked.

It was only in the late seventies, with the arrival of commercial home video and increasing interest in the history id television, that the BBC' began to concern itself with the state of its archive.

It found that there were huge gaps - the BBC Film Archive, the British Film Institute and BBC Enterprises all held some programmes, but litany more were missing because the BBC had thrown them away without a second thought.

The recovery process is still going on to this day - in 1991 an episode of Dr Who turned up in New Zealand, creating a minor media circus. In 2000 an episode of The Likely Lads was returned, and this year two of the five missing episodes of Dad's Army were retrieved from private collectors. It seems increasingly unlikely, although of course never impossible, that further material will he returned.

But whatever is recovered, it can never truly make up for what was so thoughtlessly destroyed many yours ago.

Caption: Search still on - while numerous episodes of Dr Who survive, rare material continues to be recovered today