Love of 'Dr. Who' inspires owner of Blue Box Cafe 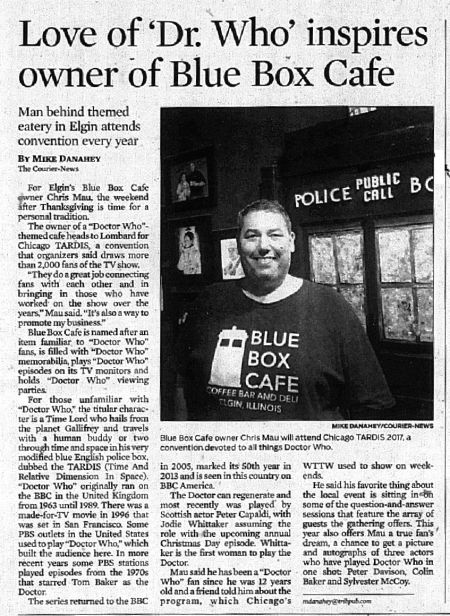 Man behind themed eatery in Elgin attends convention every year

For Elgin's Blue Box Cafe owner Chris Mau, the weekend after Thanksgiving is time for a personal tradition.

The owner of a "Doctor Who"-themed cafe heads to Lombard for Chicago TARDIS, a convention that organizers said draws more than 2,000 fans of the TV show.

"They do a great job connecting fans with each other and in bringing in those who have worked on the show over the years," Mau said. "It's also a way to promote my business."

For those unfamiliar with "Doctor Who," the titular character is a Time Lord who hails from the planet Gallifrey and travels with a human buddy or two through time and space in his very modified blue English police box, dubbed the TARDIS (Time And Relative Dimension In Space). "Doctor Who" originally ran on the BBC in the United Kingdom from 1963 until 1989. There was a made-for-TV movie in 1996 that was set in San Francisco. Some PBS outlets in the United States used to play "Doctor Who," which built the audience here. In more recent years some PBS stations played episodes from the 1970s that starred Tom Baker as the Doctor.

The Doctor can regenerate and most recently was played by Scottish actor Peter Capaldi, with Jodie Whittaker assuming the role with the upcoming annual Christmas Day episode. Whittaker is the first woman to play the Doctor.

Mau said he has been a "Doctor Who" fan since he was 12 years old and a friend told him about the program, which Chicago's WTTW used to show on weekends.

He said his favorite thing about the local event is sitting in on some of the question-and-answer sessions that feature the array of guests the gathering offers. This year also offers Mau a true fan's dream, a chance to get a picture and autographs of three actors who have played Doctor Who in one shot: Peter Davison, Colin Baker and Sylvester McCoy.