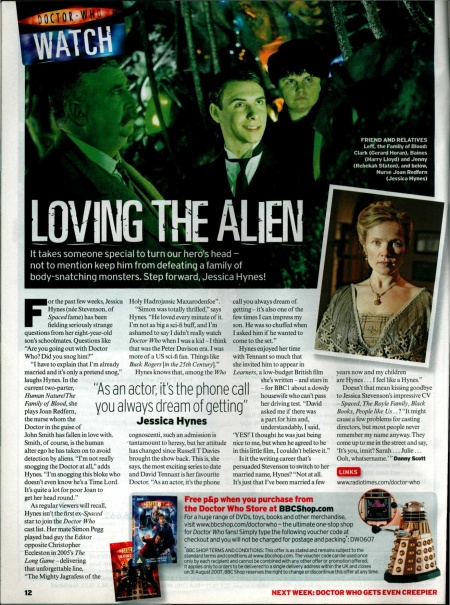 It takes someone special to turn our hero's head — not to mention keep him from defeating a family of body-snatching monsters. Step forward, Jessica Hynes!

For the past few weeks, Jessica Hynes (née Stevenson, of Spaced fame) has been fielding seriously strange questions from her eight-year-old son's schoolmates. Questions like "Are you going out with Doctor Who? Did you snog him?"

"I have to explain that I'm already married and it's only a pretend snog," laughs Hynes. In the current two-parter, Human Nature/The Family of Blood, she plays Joan Redfern, the nurse whom the Doctor in the guise of John Smith has fallen in love with. Smith, of course, is the human alter ego he has taken on to avoid detection by aliens. "I'm not really snogging the Doctor at all," adds Hynes. "I'm snogging this bloke who doesn't even know he's a Time Lord. It's quite a lot for poor Joan to get her head round."

As regular viewers will recall, Hynes isn't the first ex-Spaced star to join the Doctor Who cast list. Her mate Simon Pegg played bad guy the Editor opposite Christopher Eccleston in 2005's The Long Game — delivering that unforgettable line, "The Mighty Jagrafess of the Holy Hadrojassic Maxarodenfoe".

"Simon was totally thrilled," says Hynes. "He loved every minute of it. I'm not as big a sci-fi buff, and I'm ashamed to say I didn't really watch Doctor Who when I was a kid — I think that was the Peter Davison era. I was more of a US sci-fi fan. Things like Buck Rogers [in the 25th Century]."

Hynes knows that, among the Who cognoscenti, such an admission is tantamount to heresy, but her attitude has changed since Russell T Davies brought the show back. This is, she says, the most exciting series to date and David Tennant is her favourite Doctor. "As an actor, it's the phone call you always dream of getting— it's also one of the few times I can impress my son. He was so chuffed when I asked him if he wanted to come to the set."

Hynes enjoyed her time with Tennant so much that she invited him to appear in Learners, a low-budget British film she's written — and stars in — for BBC1 about a dowdy housewife who can't pass her driving test. "David asked me if there was a part for him and, understandably, I said, 'YES!' I thought he was just being nice to me, but when he agreed to be in this little film, I couldn't believe it."

Is it the writing career that's persuaded Stevenson to switch to her married name, Hynes? "Not at all. It's just that I've been married a few years now and my children are Hynes ... I feel like a Hynes."

Doesn't that mean kissing goodbye to Jessica Stevenson's impressive CV — Spaced, The Royle Family, Black Books, People like Us .. ? "It might cause a few problems for casting directors, but most people never remember my name anyway. They come up to me in the street and say, 'It's you, innit? Sarah ... Julie .. . Ooh, whatsername.'"

Next Week: Doctor Who Gets Even Creepier