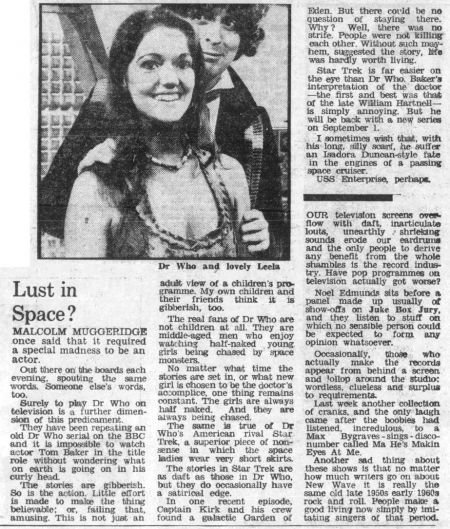 MALCOLM MUGGERIDGE once said that it required a special madness to be an actor.

Out there on the boards each evening, spouting the same words. Someone else's words, too.

Surely to play Dr Who on television is a further dimension of this predicament.

They have been repeating an old Dr Who serial on the BBC and it is impossible to watch actor Tom Baker in the title role without wondering what on earth is going on in his curly head.

The stories are gibberish. So is the action. Little effort is made to make the thing believable; or, failing that, amusing. This is not just an adult view of a children's programme. My own children and their friends think it is gibberish, too.

The real fans of Dr Who are not children at all. They are middle-aged men who enjoy watching half-naked young girls being chased by space monsters.

No matter what time the stories are set in, or what new girl is Chosen to be the doctor's accomplice, one thing remains constant. The girls are always half naked. And they are always being chased.

The same is true of Dr Who's American rival Star Trek, a superior piece of nonsense in which the space ladies wear very short skirts.

The stories in Star Trek are as daft as those in Dr Who, but they do occasionally have a satirical edge.

In one recent episode, Captain Kirk and his crew found a galactic Garden of Eden. But there could be no question of staying there. Why ? Well, there was no strife. People were not killing each other. Without such mayhem, suggested the story, fife was hardly worth living.

Star Trek is far easier on the eye than Dr Who. Baker's interpretation of the doctor —the first and best was that of the late William Hartnell—is simply annoying. But he will be back with a new series on September 1.

I sometimes wish that, with his long, silly scarf, he suffer an Isadora Duncan-style fate in the engines of a passing space cruiser.

Caption: Dr Who and lovely Leela