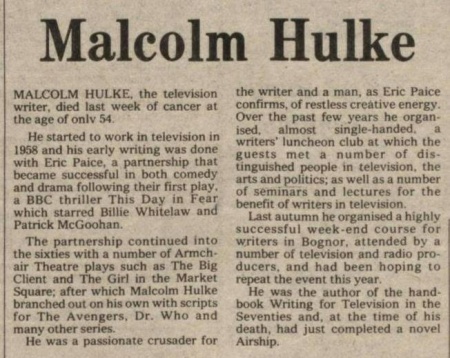 MALCOLM HULKE, the television writer, died last week of cancer at the age of only 54.

He started to work in television in 1958 and his early writing was done with Eric Paice, a partnership that became successful in both comedy and drama following their first play, a BBC thriller This Day in Fear which starred Billie Whitelaw and Patrick McGoohan.

The partnership continued into the sixties with a number of Armchair Theatre plays such as The Big Client and The Girl in the Market Square; after which Malcolm Hulke branched out on his own with scripts for The Avengers. Dr. Who and many other series.

He was a passionate crusader for the writer and a man, as Eric Paice confirms, of restless creative energy. Over the past few years he organised. almost single-handed. a writers' luncheon club at which the guests met a number of distinguished people in television. the arts and politics; as well as a number of seminars and lectures for the benefit of writers in television.

Last autumn he organised a highly successful week-end course for writers in Bognor. attended by a number of television and radio producers. and had been hoping to repeat the event this year.

He was the author of the handbook Writing for Television in the Seventies and, at the time of his death, had just completed a novel Airship.