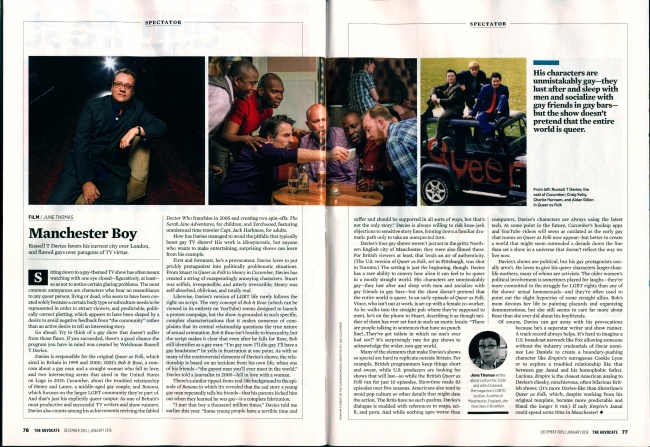 Sitting down to a gay-themed TV show has often meant watching with one eye closed—figuratively, at least—so as not to notice certain glaring problems. The most common annoyances are characters who bear no resemblance to any queer person, living or dead, who seem to have been created solely because a certain body type or subculture needs to be represented in order to attract viewers, and predictable, politically correct plotting, which appears to have been shaped by a desire to avoid negative feedback from "the community" rather than an active desire to tell an interesting story.

Go ahead: Try to think of a gay show that doesn't suffer from those flaws. If you succeeded, there's a good chance the program you have in mind was created by Welshman Russell T Davies.

Davies is responsible for the original Queer as Folk, which aired in Britain in 1999 and 2000; 2001's Bob and Rose, a rom-corn about a gay man and a straight woman who fall in love; and two intersecting series that aired in the United States on Logo in 2015: Cucumber, about the troubled relationship of Henry and Lance, a middle-aged gay couple, and Banana, which focuses on the larger LGBT community they're part of. And that's just his explicitly queer output: As one of Britain's most productive and successful TV writers and show runners, Davies also counts among his achievements reviving the fabled Doctor Who franchise in 2005 and creating two spin-offs: The Sarah Jane Adventures, for children, and Torchwood, featuring omnisexual time traveler Capt. Jack Harkness, for adults.

How has Davies managed to avoid the pitfalls that typically beset gay TV shows? His work is idiosyncratic, but anyone who wants to make entertaining, surprising shows can learn from his example.

First and foremost, he's a provocateur. Davies loves to put prickly protagonists into politically problematic situations. From Stuart in Queer as Folk to Henry in Cucumber, Davies has created a string of exasperatingly annoying characters. Stuart was selfish, irresponsible, and utterly irresistible; Henry was self-absorbed, oblivious, and totally real.

Likewise, Davies's version of LGBT life rarely follows the right-on script. The very concept of Bob & Rose (which can be viewed in its entirety on YouTube) seems designed to launch a protest campaign, but the show is grounded in such specific, complex characterizations that it makes nonsense of complaints that its central relationship questions the true nature of sexual orientation. Bob Et Rose isn't hostile to bisexuality, but the script makes it clear that even after he falls for Rose, Bob still identifies as a gay man: "I'm gay now. I'll die gay. I'll have a gay headstone!" he yells in frustration at one point. As with so many of the controversial elements of Davies's shows, the relationship is based on an incident from his own life, when one of his friends—"the gayest man you'll ever meet in the world," Davies told a journalist in 2000—fell in love with a woman.

There's a similar ripped-from-real-life background to the episode of Banana in which it's revealed that the sad story a young gay man repeatedly tells his friends—that his parents kicked him out when they learned he was gay—is a complete fabrication.

"I met that boy a thousand million times," Davies told me earlier this year. "Some young people have a terrible time and suffer and should be supported in all sorts of ways, but that's not the only story." Davies is always willing to risk knee-jerk objections to sensitive story lines, feinting down a familiar dramatic path only to take an unexpected turn.

Davies's four gay shows weren't just set in the gritty Northern English city of Manchester; they were also filmed there. For British viewers at least, that lends an air of authenticity. (The U.S. version of Queer as Folk, set in Pittsburgh, was shot in Toronto.) The setting is just the beginning, though. Davies has a rare ability to convey how alien it can feel to be queer in a mostly straight world. His characters are unmistakably gay—they lust after and sleep with men and socialize with gay friends in gay bars—but the show doesn't pretend that the entire world is queer. In an early episode of Queer as Folk, Vince, who isn't out at work, is set up with a female co-worker. As he walks into the straight pub where they're supposed to meet, he's on the phone to Stuart, describing it as though neither of them has ever set foot in such an exotic locale: "There are people talking in sentences that have no punch line!...They've got toilets in which no one's ever had sex!" It's surprisingly rare for gay shows to acknowledge the wider, non-gay world.

Many of the elements that make Davies's shows so special are hard to replicate outside Britain. For example, British programmers keep things short and sweet, while U.S. producers are looking for shows that will last—so while the British Queer as Folk ran for just 10 episodes, Showtime made 83 episodes over five seasons. Americans also tend to avoid pop culture or other details that might date the action. The Brits have no such qualms. Davies's dialogue is studded with references to soaps, sci-fi, and porn. And while nothing ages worse than computers, Davies's characters are always using the latest tech. At some point in the future, Cucumber's hookup apps and YouTube videos will seem as outdated as the early gay chat rooms on Queer as Folk now appear—but better to create a world that might seem outmoded a decade down the line than set a show in a universe that doesn't reflect the way we live now.

Davies's shows are political, but his gay protagonists usually aren't. He loves to give his queer characters larger-than-life mothers, many of whom are activists. The older women's political involvement is sometimes played for laughs—they're more committed to the struggle for LGBT rights than any of the shows' actual homosexuals—and they're often used to point out the slight hypocrisy of some straight allies. Bob's mom devotes her life to painting placards and organizing demonstrations, but she still seems to care far more about Rose than she ever did about his boyfriends.

Of course, Davies can get away with his provocations because he's a superstar writer and show runner. A track record always helps. It's hard to imagine a U.S. broadcast network like Fox allowing someone without the industry credentials of Oscar nominee Lee Daniels to create a boundary-pushing character like Empire's outrageous Cookie Lyon or to explore a troubled relationship like that between gay Jamal and his homophobic father, Lucious. Empire is the closest American analog to Davies's cheeky, mischievous, often hilarious British shows. (It's more Davies-like than Showtime's Queer as Folk, which, despite working from his original template, became more predictable and bland the longer it ran.) If only Empire's Jamal could spend some time in Manchester!

June Thomas writes about culture for Slate and edits Outward, the magazine's LGBTQ section. A native of Manchester, England, she now lives in Brooklyn.