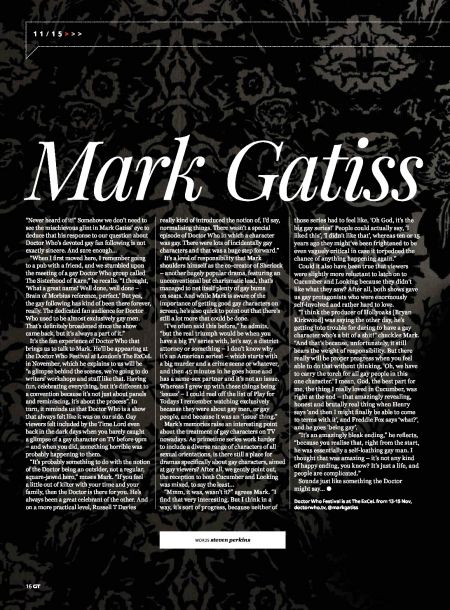 Never heard of it!" Somehow we don't need to see the mischievous glint in Mark Gatiss' eye to deduce that his response to our question about Doctor Who's devoted gay fan following is not exactly sincere. And sure enough...

"When I first moved here, I remember going to a pub with a friend, and we stumbled upon the meeting of a gay Doctor Who group called The Sisterhood of Karn," he recalls. "I thought, 'What a great name! Well done, well done — Brain of Morbius reference, perfect: But yes, the gay following has kind of been there forever, really. The dedicated fan audience for Doctor Who used to be almost exclusively gay men. That's definitely broadened since the show came back, but it's always a part of it It's the fan experience of Doctor Who that brings us to talk to Mark. Hell be appearing at the Doctor Who Festival at London's The ExCeL in November, which he explains to us will be "a glimpse behind the scenes, were going to do writers' workshops and stuff like that. Having fun, celebrating everything, but it's different to a convention because it's not just about panels and reminiscing, it's about the process". In turn, it reminds us that Doctor Who is a show that always felt like it was on our side. Gay viewers felt included by the Time Lord even back in the dark days when you barely caught a glimpse of a gay character on TV before 9pm — and when you did, something horrible was probably happening to them.

"Ifs probably something to do with the notion of the Doctor being an outsider, not a regular, square-jawed hero," muses Mark. "If you feel a little out of kilter with your time and your family, then the Doctor is there for you. He's always been a great celebrant of the other. And on a more practical level, Russell T Davies

really kind of introduced the notion of, I'd say, normalising things. There wasn't a special episode of Doctor Who in which a character was gay. There were lots of incidentally gay characters and that was a huge step forward." Its a level of responsibility that Mark shoulders himself as the co-creator of Sherlock — another hugely popular drama, featuring an unconventional but charismatic lead, that's managed to net itself plenty of gay bums on seats. And while Mark is aware of the importance of getting good gay characters on screen, he's also quick to point out that there's still a lot more that could be done.

"I've often said this before," he admits, "but the real triumph would be when you have a big TV series with, let's say, a district attorney or something — I don't know why it's an American series! — which starts with a big murder and a crime scene or whatever, and then 45 minutes in he goes home and has a same-sex partner and it's not an issue. Whereas I grew up with these things being Issues' — I could reel off the list of Play for Todays I remember watching exclusively because they were about gay men, or gay people, and because it was an Issue thing." Mark's memories raise an interesting point about the treatment of gay characters on TV nowadays. As primetime series work harder to include a diverse range of characters of all sexual orientations, is there still a place for dramas specifically about gay characters, aimed at gay viewers? After all, we gently point out, the reception to both Cucumber and Looking was mixed, to say the least...

"Mmm, it was, wasn't it?" agrees Mark. "I find that very interesting. But I think in a way, it's sort of progress, because neither of

those series had to feel like, 'Oh God, it's the big gay series!' People could actually say, 1 W liked this', didn't like that', whereas ten or 15 years ago they might've been frightened to be even vaguely critical in case it torpedoed the chance of anything happening again."

Could it also have been true that viewers were slightly more reluctant to latch on to Cucumber and Looking because they didn't like what they saw? After all, both shows gave us gay protagonists who were enormously self-involved and rather hard to love.

"I think the producer of Hollyoaks [Bryan Kirkwood] was saying the other day, he's getting into trouble for daring to have a gay character who's a bit of a shit!" chuckles Mark. And that's because, unfortunately, it still bears the weight of responsibility. But there really will be proper progress when you feel able to do that without thinking, 'Oh, we have to carry the torch for all gay people in this one character: I mean, God, the best part for me, the thing I really loved in Cucumber, was right at the end — that amazingly revealing, honest and brutally real thing when Henry says and then I might finally be able to come to terms with it', and Freddie Fox says 'what?', and he goes 'being gay'.

"It's an amazingly bleak ending," he reflects, "because you realise that, right from the start, he was essentially a self-loathing gay man. I thought that was amazing — it's not any kind of happy ending, you know? It's just a life, and people are complicated."

Doctor Who Festival is at The ExCeL from 13-15 Nov, doctorwho.tv, @markgatiss