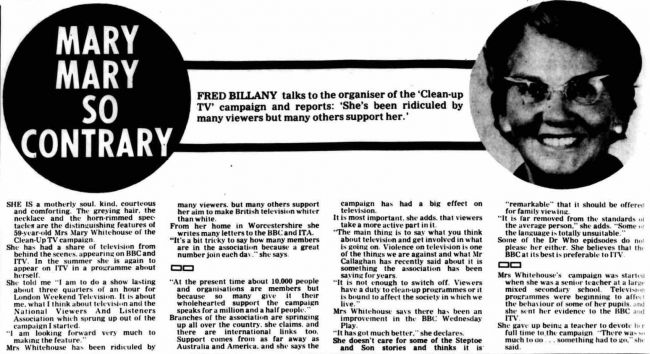 FRED BILLANY talks to the organiser of the 'Clean-up TV' campaign and reports: 'She's been ridiculed by many viewers but many others support her.'

SHE IS a motherly soul, kind, courteous and comforting. The greying hair. the necklace and the horn-rimmed spectacles are the distinguishing features of 59-year-old Mrs Mary Whitehouse of the Clean-Up TV campaign.

She has had a share of television from behind the scenes. appearing on BBC and ITV. In the summer she Is again to appear on ITV in a programme about herself.

She told me "I am to do a show lasting about three quarters of an hour for London Weekend Television. It is about me. what I think about television and the National Viewers And Listeners Association which sprung up out of the campaign I started.

"I am looking forward very much to making the feature."

Mrs Whitehouse has been ridiculed by many viewers. but many others support her aim to make British television whiter than white.

From her home in Worcestershire she writes many letters to the BBC and ITA. "It's a bit tricky to say how many members are in the association because a great number join each day," she says.

"At the present time about 10,000 people and organisations are members but because so many give it their wholehearted support the campaign speaks for a million and a half people." Branches of the association are springing up all over the country. she claims. and there are International links too. Support comes from as far away as Australia and America, and she says the campaign has had a big effect on television.

It is most important, she adds, that viewers take a more active part in it.

"The main thing is to say what you think about television and get involved in what is going on. Violence on television is one of the things we are against and what Mr Callaghan has recently said about it is something the association has been saying for years.

"It is not enough to switch off. Viewers have a duty to cleanup programmes or it is bound to affect the society in which we live."

Mrs Whitehouse says there has been an improvement in the BBC Wednesday Play.

"It has got much better," she declares.

She doesn't care for some of the Steptoe and Son stories and thinks it is "remarkable" that it should be offered for family viewing.

"It is far removed from the standards of the average person," she adds. "Some of the language is totally unsuitable."

Some of the Dr Who epidsodes do not please her either. She believes that the BBC at its best is preferable to ITV.

Mrs Whitehouse's campaign was started when she was a senior teacher at a large mixed secondary school. Television programmes were beginning to affect the behaviour of some of her pupils, and she sent her evidence to the BBC and ITV.

She gave up being a teacher to devote her full time to the campaign. "There was so much to do ... something had to go," she said.