Mary has no love for Dr Who 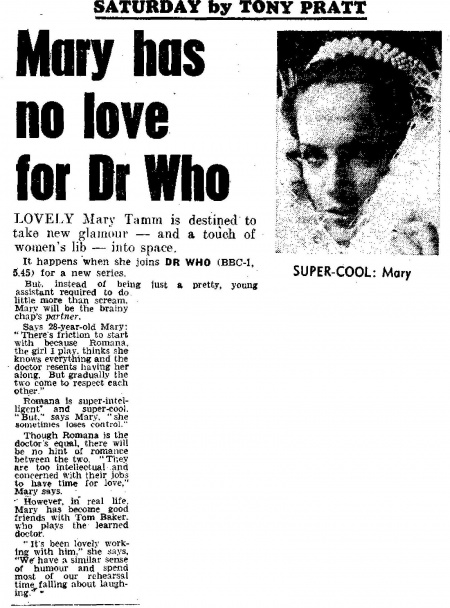 But, instead of being just a pretty, young assistant required to do little more than scream, Mary will be the brainy chap's partner.

Says 28-year-old Mary: "There's friction to start with because Romano, the girl I play thinks she knows everything and the doctor resents having her along, But gradually the two come to respect each other."

Romana is super-intelligent' and super-cool. "But," says Mary, "she sometimes loses control."

Though Romana is the doctor's equal, there will be no hint of romance between the two. "They are too intellectual and concerned With their jobs to have time for love," Mary Says.

However, in real life, Mary has become good friends with Tom Baker who plays the learned doctor.

"It's been lovely working with him," she says, "We have a similar sense of humour and spend most of our rehearsal time falling about laughing