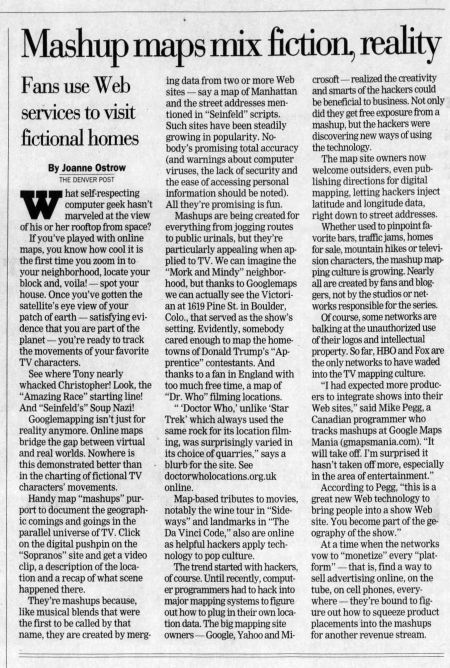 What self-respecting computer geek hasn't marveled at the view of his or her rooftop from space?

If you've played with online maps, you know how cool it is the first time you zoom in to your neighborhood, locate your block and, voila! — spot your house. Once you've gotten the satellite's eye view of your patch of earth — satisfying evidence that you are part of the planet — you're ready to track the movements of your favorite TV characters.

Googlemapping isn't just for reality anymore. Online maps bridge the gap between virtual and real worlds. Nowhere is this demonstrated better than in the charting of fictional TV characters' movements.

Handy map "mashups" purport to document the geographic comings and goings in the parallel universe of TV. Click on the digital pushpin on the "Sopranos" site and get a video clip, a description of the location and a recap of what scene happened there.

They're mashups because, like musical blends that were the first to be called by that name, they are created by merging data from two or more Web sites — say a map of Manhattan and the street addresses mentioned in "Seinfeld" scripts. Such sites have been steadily growing in popularity. Nobody's promising total accuracy (and warnings about computer viruses, the lack of security and the ease of accessing personal information should be noted). All they're promising is fun.

Mashups are being created for everything from jogging routes to public urinals, but they're particularly appealing when applied to TV. We can imagine the "Mork and Mindy" neighborhood, but thanks to Googlemaps we can actually see the Victorian at 1619 Pine St. in Boulder, Colo., that served as the show's setting. Evidently, somebody cared enough to map the hometowns of Donald Trump's "Apprentice" contestants. And thanks to a fan in England with too much free time, a map of "Dr. Who" filming locations.

"'Doctor Who,' unlike 'Star Trek' which always used the same rock for its location filming, was surprisingly varied in its choice of quarries," says a blurb for the site. See doctorwholocations.org.uk online.

Map-based tributes to movies, notably the wine tour in "Sideways" and landmarks in "The Da Vinci Code," also are online as helpful hackers apply technology to pop culture.

The trend started with hackers, of course. Until recently, computer programmers had to hack into major mapping systems to figure out how to plug in their own location data. The big mapping site owners — Google, Yahoo and Microsoft — realized the creativity and smarts of the hackers could be beneficial to business. Not only did they get free exposure from a mashup, but the hackers were discovering new ways of using the technology.

Whether used to pinpoint favorite bars, traffic jams, homes for sale, mountain hikes or television characters, the mashup map ping culture is growing. Nearly all are created by fans and blog gers, not by the studios or networks responsible for the series.

Of course, some networks are balking at the unauthorized use of their logos and intellectual property. So far, HBO and Fox are the only networks to have waded into the TV mapping culture.

"I had expected more producers to integrate shows into their Web sites," said Mike Pegg, a Canadian programmer who tracks mashups at Google Maps Mania (gmapsmania.com). "It will take off. I'm surprised it hasn't taken off more, especially in the area of entertainment."

According to Pegg, "this is a great new Web technology to bring people into a show Web site. You become part of the geography of the show."

At a time when the networks vow to "monetize" every "platform" — that is, find a way to sell advertising online, on the tube, on cell phones, everywhere — they're bound to figure out how to squeeze product placements into the mashups for another revenue stream.