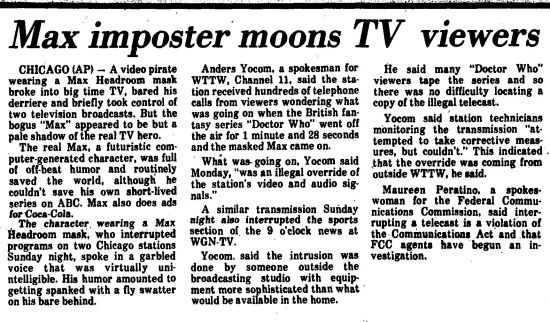 CHICAGO (AP) — A video pirate wearing a Max Headroom mask broke into big time TV, bared his derriere and briefly took control of two television broadcasts. But the bogus "Max" appeared to be but a pale shadow of the real TV hero.

The real Max, a futuristic computer-generated character, was full of off-beat humor and routinely saved the world, although he couldn't save his own short-lived series on ABC. Max also does ads for Coca-Cola.

The character, wearing a Max Headroom mask, who interrupted programs on two Chicago stations Sunday night, spoke in a garbled voice that was virtually unintelligible. His humor amounted to getting spanked with a fly swatter on his bare behind.

Anders Yocom, a spokesman for WTTW, Channel 11, said the station received hundreds of telephone calls from viewers wondering what was going on when the British fantasy series "Doctor Who" went off the air for 1 minute and 28 seconds and the masked Max came on.

What was going on, Yocom said Monday, "was an illegal override of the station's video and audio signals." A similar transmission Sunday night also interrupted the sports section of the 9 o'clock news at WGN-TV.

Yocom, said the intrusion was done by someone outside the broadcasting studio with equipment more sophisticated than what would be available in the home.

He said many "Doctor Who" viewers tape the series and so there was no difficulty locating a copy of the illegal telecast.

Yocom said station technicians monitoring the transmission "attempted to take corrective measures, but couldn't." This indicated that the override was coming from outside WTTW, he said.

Maureen Peratino, a spokeswoman for the Federal Communications Commission, said interrupting a telecast is a violation of the Communications Act and that FCC agents have begun an investigation.