Mechanics work round the clock for Dr Who 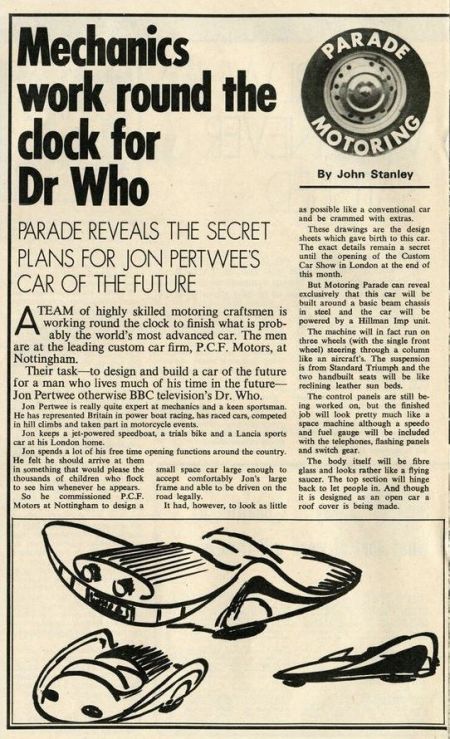 A TEAM of highly skilled motoring craftsmen is working round the clock to finish what is probably the world's most advanced car. The men are at the leading custom car firm, P.C.F. Motors, at Nottingham.

Their task—to design and build a car of the future for a man who lives much of his time in the future—Jon Pertwee otherwise BBC television's Dr. Who.

Jon Pertwee is really quite expert at mechanics and a keen sportsman. He has represented Britain in power boat racing. has raced can, competed in hill climbs and taken part in motorcycle events.

Jon keeps a jet-powered speedboat, a trials bike and a Lancia spans car at his London home.

Jon spends a lot of his free time opening functions around the country. He felt he should arrive at them in something that would please the thousands of children who flock to see him whenever he appears.

So he commissioned P.C.F. Motors at Nottingham to design a small space car large enough to accept comfortably Jon's large frame and able to be driven on the road legally.

It had, however, to look as little as possible like a conventional car and be crammed with extras.

These drawings are the design sheets which gave birth to this car. The exact details remain a secret until the opening of the Custom Car Show in London at the end of this month.

But Motoring Parade can reveal exclusively that this car will be built around a basic beam chassis in steel and the car will be powered by a Hillman Imp unit.

The machine will in fact run on three wheels (with the single front wheel) steering through a column like an aircraft's. The suspension is from Standard Triumph and the two handbuilt seats will be like reclining leather sun beds.

The control panels are still being worked on. but the finished job will look pretty much like a space machine although a speedo and fuel gauge will be included with the telephones. flashing panels and switch gear.

The body itself will be fibre glass and looks rather like a flying saucer. The top section will hinge back to let people in. And though it is designed as an open car a roof cover is being made.