Meet the stars on BBC stand 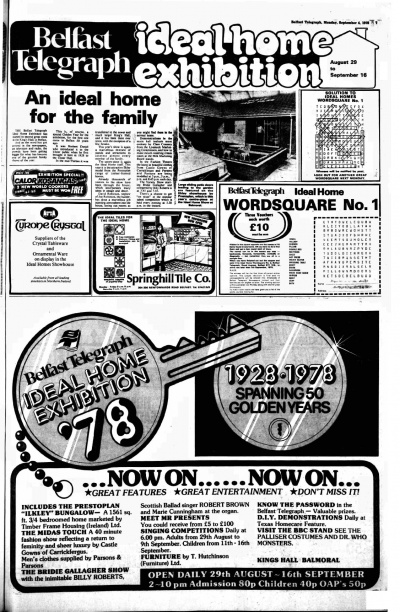 BBC Radio Ulster will be producing 37 programmes in the studio at the BBC exhibition stand.

Paul McDowell will be presenting the 'Change Gear' programme 'live' from the studio at 5.30 p.m., Mondays to Fridays.

Some of the Radio Ulster personalities will be taking it in turns to record the 'With You Until Midnight' programmes including Margaret Percy, Walter Love, Michael Kerr, Glenn Richards, Tony McAuley and Paddy O'Flaherty.

Paddy will also be recording two of his 'Countryfolk' shows in the exhibition studio.

From the network, John Craven of "Newsround" will be paying a flying visit on Friday, and our own Gloria Hunniford visits the Stand on September 4 to inaugurate the Taste of Hunni Club.

Paul Clark will present two 'specials' at 7.30 p.m. on Saturday, 2nd and Saturday, 16th September, and Tony Martin will introduce his 'Time for Tony' request show 'live' on Radio Ulster from the exhibition studio on Saturdays. 2nd, 9th and 16th September.

A question-time edition of 'Ulster Garden' will be recorded during the exhibition.

Visitors to the BBC stand will be able to hear their gardening problems discussed by the experts.

Loudspeakers outside the studio will enable visitors to the BBC stand to hear how the radio programmes are prepared for transmission, and to hear the 'live' programmes as they go 'on the air.'

Some of the elaborate and beautifully detailed costumes made for the BBC television drama series 'The Pallisers' will be on display.

But visitors are being asked to try to resist the temptation to feel the rich and delicate fabrics of the dresses.

Some of the monsters from the Dr. Who series will be seen wreathed in mist.

A closed circuit colour television system is being installed at the BBC stand, with a television studio camera, and 5 cwt. of equipment, to enable members of the public to see themselves on screen.

Robert Cooper, Drama Producer with the BBC in Belfast, has written a radio comedy specially for the BBC studio at the exhibition. Visitors to the BBC stand will be invited to read a part in 'The Play; which will be produced with full sound effects, but strictly not for broadcasting!