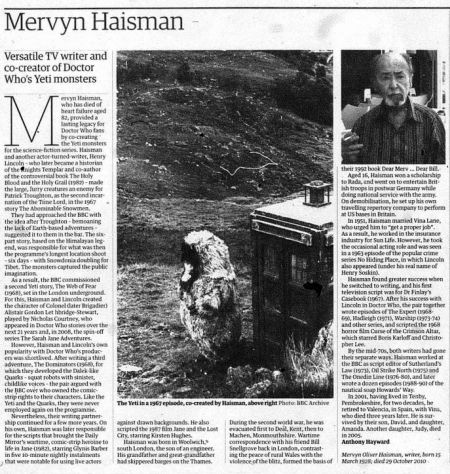 Mervyn Haisman, who has died of heart failure aged 82, provided a lasting legacy for Doctor Who fans by co-creating the Yeti monsters for the science-fiction series. Haisman and another actor-turned-writer, Henry Lincoln - who later became a historian of the Knights Templar and co-author of the controversial book The Holy Blood and the Holy Grail (1982) - made the large, furry creatures an enemy for Patrick Troughton, as the second incarnation of the Time Lord, in the 1967 story The Abominable Snowmen.

They had approached the BBC with the idea after Troughton - bemoaning the lack of Earth-based adventures - suggested it to them in the bar. The six-part story, based on the Himalayan legend, was responsible for what was then the programme's longest location shoot - six days - with Snowdonia doubling for Tibet. The monsters captured the public imagination.

As a result, the BBC commissioned a second Yeti story, The Web of Fear (1968), set in the London underground. For this, Haisman and Lincoln created the character of Colonel (later Brigadier) Alistair Gordon Let hbridge-Stewart, played by Nicholas Courtney, who appeared in Doctor Who stories over the next 21 years and, in 2008, the spin-off series The Sarah Jane Adventures.

However, Haisman and Lincoln's own popularity with Doctor Who's producers was shortlived. After writing a third adventure, The Dominators (1968), for which they developed the Dalek-like Quarks - squat robots with sinister, childlike voices - the pair argued with the BBC over who owned the comic-strip rights to their characters. Like the Yeti and the Quarks, they were never employed again on the programme.

Nevertheless, their writing partnership continued for a few more years. On his own, Haisman was later responsible for the scripts that brought the Daily Mirror's wartime, comic-strip heroine to life in Jane (1982), starring Glynis Barber in five 10-minute nightly instalments that were notable for using live actors against drawn backgrounds. He also scripted the 1987 film Jane and the Lost City, starring Kirsten Hughes.

Haisman was born in Woolwich, south London, the son of an engineer. His grandfather and great-grandfather had skippered barges on the Thames. During the second world war, he was evacuated first to Deal, Kent, then to Machen, Monmouthshire. Wartime correspondence with his friend Bill Snellgrove back in London, contrasting the peace of rural Wales with the violence of the blitz, formed the basis of their 1992 book Dear Merv . . . Dear Bill.

Aged 16, Haisman won a scholarship to Rada, and went on to entertain British troops in postwar Germany while doing national service with the army. On demobilisation, he set up his own travelling repertory company to perform at US bases in Britain.

In 1951, Haisman married Vina Lane, who urged him to "get a proper job". As a result, he worked in the insurance industry for Sun Life. However, he took the occasional acting role and was seen in a 1963 episode of the popular crime series No Hiding Place, in which Lincoln also appeared (under his real name of Henry Soskin).

Haisman found greater success when he switched to writing, and his first television script was for Dr Finlay's Casebook (1967). After his success with Lincoln in Doctor Who, the pair together wrote episodes of The Expert (1968-69), Hadleigh (1971), Warship (1973-74) and other series, and scripted the 1968 horror film Curse of the Crimson Altar, which starred Boris Karloff and Christopher Lee.

In 2001, having lived in Tenby, Pembrokeshire, for two decades, he retired to Valencia, in Spain, with Vina, who died three years later. He is survived by their son, David, and daughter, Amanda. Another daughter, Judy, died in 2005.

Captions: The Yeti in a 1967 episode, co-created by Haisman, above right Photo: BBC Archive

CORRECTION: * A less than abominable error in an obituary led us to state that the Yeti didn't appear in the BBC series Doctor Who after 1968. One made an appearance in the anniversary celebration episode The Five Doctors in 1983 (Obituaries, 10 December, page 51).