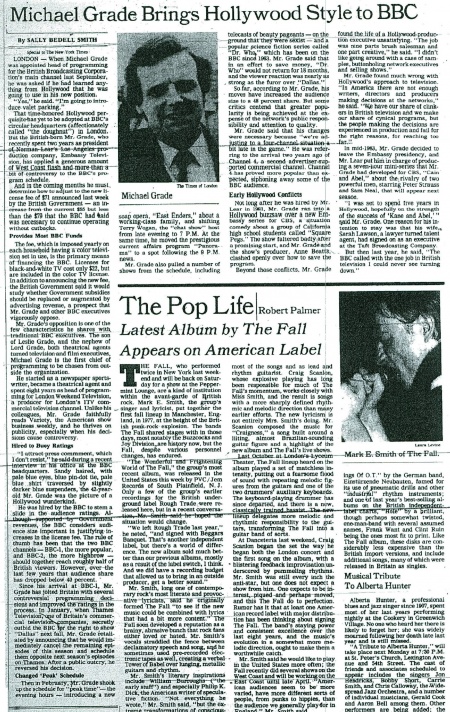 LONDON — When Michael Grade was appointed head of programming for the British Broadcasting Corporation's main channel last September, he was asked if he had learned anything from Hollywood that he was going to use in his new position.

That time-honored Hollywood perquisite has yet to be adopted at BBC's circular headquarters (affectionately called "the doughnut") in London. But the British-born Mr. Grade, who recently spent two years as president of Norman Lear's Los Angeles production company, Embassy Television, has applied a generous amount of West Coast flash and more than a bit of controversy to the BBC's program schedule.

And in the coming months he must determine how to adjust to the new license fee of $71 announced last week by the British Government — an increase from the current $55 but less than the $79 that the BBC had said was necessary to continue operating without cutbacks.

The fee, which is imposed yearly on each household having a color television set in use, is the primary means of financing the BBC. Licenses for black-and-white TV cost only $22, but are included in the color TV license. In addition to announcing the new fee, the British Government said it would study whether Government subsidies should be replaced or augmented by advertising revenue, a prospect that Mr. Grade and other BBC executives vigorously oppose.

Mr. Grade's opposition is one of the few characteristics he shares with traditional BBC executives. The son of Leslie Grade, and the nephew of Lord Grade, both theatrical agents turned television and film executives, Michael Grade is the first chief of programming to be chosen from outside the organization.

He started as a newspaper sportswriter, became a theatrical agent and spent eight years as head of programming for London Weekend Television, a producer for London's ITV commercial television channel. Unlike his colleagues, Mr. Grade faithfully reads Variety, the American show business weekly, and he thrives on publicity, especially when his decisions cause controversy.

"I attract press commment, which I don't resist," he said during a recent interview in his office at the BBC headquarters. Sandy haired, with pale blue eyes, blue pin-dot tie, pale blue shirt traversed by slightly darker blue suspenders, the 42-yearold Mr. Grade was the picture of a Hollywood wunderkind.

He was hired by the BBC to stem a slide in the audience ratings. Although supported by Government revenues, the BBC considers audience size important in justifying increases in the license fee. The rule of thumb has been that the two BBC channels — BBC-1, the more popular, and BBC-2, the more highbrow — should together reach roughly half of British viewers. However, over the last few years that audience share has dropped below 40 percent.

Since his arrival at BBC-1, Mr. Grade has jolted Britain with several controversial programming decisions and improved the ratings in the process. In January, when Thames Television, one of Britain's commercial television companies, secretly outbid the BBC for the right to show "Dallas" next fall, Mr. Grade retaliated by announcing that he would immediately cancel the remaining episodes of this season and schedule them opposite next season's episodes on Thames. After a public outcry, he reversed his decision.

Then in February, Mr. Grade shook up the schedule for "peak time"— the evening hours — introducing a new soap opera, "East Enders," about a working-class family, and shifting Terry Wogan, the "chat show" host from late evening to 7 P.M. At the same time, he moved the prestigious current affairs program "Panorama" to a spot following the 9 P.M. news.

Mr. Grade also pulled a number of shows from the schedule, including telecasts of beauty pageants — on the ground that they were sexist — and a popular science fiction series called "Dr. Who," which has been on the BBC since 1963. Mr. Grade said that in an effort to save money, "Dr. Who" would not return for 18 months, and the viewer reaction was nearly as strong as the furor over "Dallas."

So far, according to Mr. Grade, his moves have increased the audience size to a 48 percent share. But some critics contend that greater popularity is being achieved at the expense of the network's public responsibility and attention to quality.

Mr. Grade said that his changes were necessary because "we're adjusting to a four-channel situation a bit late in the game." He was referring to the arrival two years ago of Channel 4, a second advertiser-supported commercial channel. Channel 4 has proved more popular than expected, siphoning away some of the BBC audience.

Not long after he was hired by Mr. Lear in 1981, Mr. Grade ran into a Hollywood buzzsaw over a new Embassy series for CBS, a situation comedy about a group of California high school students called "Square Pegs." The show faltered badly after a promising start, and Mr. Grade and the show's producer, Anne Beatts, clashed openly over how to save the program.

Beyond those conflicts, Mr. Grade found the life of a Hollywood production executive unsatisfying. "The job was nine parts brush salesman and one part creative," he said. "I didn't like going around with a case of samples, buttonholing network executives and selling shows."

Mr. Grade found much wrong with Hollywood's approach to television. "In America there are not enough writers, directors and producers making decisions at the networks," he said. "We have our share of clinkers in British television and we make our share of cynical programs, but the people making the decisions are experienced in production and fail for the right reasons, for reaching too far."

In mid-1983, Mr. Grade decided to leave the Embassy presidency, and Mr. Lear put him in charge of producing a seven-hour mini-series that Mr. Grade had developed for CBS, "Cain and Abel," about the rivalry of two powerful men, starring Peter Strauss and Sam Neal, that will appear next season.

"I was set to spend five years in Hollywood, hopefully on the strength of the success of 'Kane and Abel,'" said Mr. Grade. One reason for his intention to stay was that his wife, Sarah Lawson, a lawyer turned talent agent, had signed on as an executive at the Taft Broadcasting Company.

But then last year, he said, "The BBC called with the one job in British television I could never see turning down."