Milk Strikes Gold on Dr Who 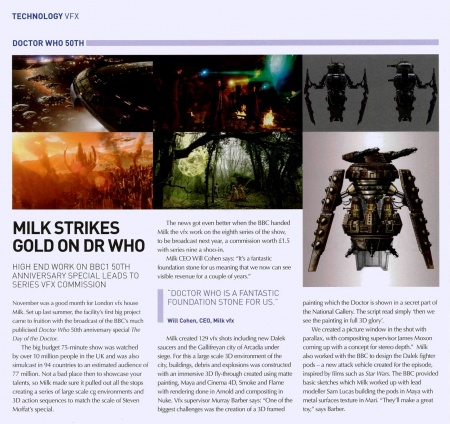 November was a good month for London vfx house Milk. Set up last summer, the facility's first big project came to fruition with the broadcast of the BBC's much publicised Doctor Who 50th anniversary special The Day of the Doctor.

The big budget 75-minute show was watched by over 10 million people in the UK and was also simulcast in 94 countries to an estimated audience of 77 million. Not a bad place then to showcase your talents, so Milk made sure it pulled out all the stops creating a series of large scale cg environments and 3D action sequences to match the scale of Steven Moffat's special.

The news got even better when the BBC handed Milk the vfx work on the eighth series of the show, to be broadcast next year, a commission worth £1.5 with series nine a shoo-in.

Milk CEO Will Cohen says: "It's a fantastic foundation stone for us meaning that we now can see visible revenue for a couple of years."

Milk created 129 vfx shots including new Dalek saucers and the Gallifreyan city of Arcadia under siege. For this a large scale 3D environment of the city, buildings, debris and explosions was constructed with an immersive 3D fly-through created using matte painting, Maya and Cinema 4D, Smoke and Flame with rendering done in Arnold and compositing in Nuke. Vfx supervisor Murray Barber says: "One of the biggest challenges was the creation of a 3D framed painting which the Doctor is shown in a secret part of the National Gallery. The script read simply 'then we see the painting in full 3D glory'.

We created a picture window in the shot with parallax, with compositing supervisor James Moxon coming up with a concept for stereo depth." Milk also worked with the BBC to design the Dalek fighter pods — a new attack vehicle created for the episode, inspired by films such as Star Wars. The BBC provided basic sketches which Milk worked up with lead modeller Sam Lucas building the pods in Maya with metal surfaces texture in Mari. "They'll make a great toy," says Barber.