Missing 'Dr. Who' Episode Turns Up 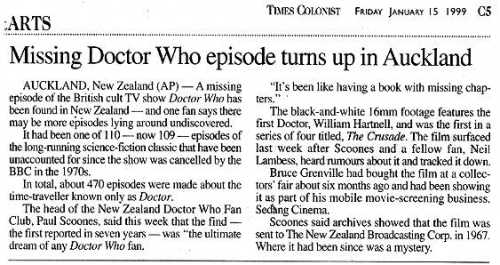 AUCKLAND, New Zealand (AP) A missing episode of the British cult TV show Dr. Who has been found in New Zealand, and one fan says there may be more episodes laying around undiscovered.

It had been one of 110, now 109, episodes of the long-running science-fiction classic which have been unaccounted for since the show was canceled by the BBC in the 1970s.

In total, about 470 episodes were made about the time-traveling Dr. Who.

New Zealand Dr. Who Fan Club president, Paul Scoones said Wednesday that the find, the first reported in seven years, was "the ultimate dream of any Dr. Who fan. It's been like having a book with missing chapters."

The black-and-white 16mm movie film features the first Dr. Who, William Hartnell, and was the first in a series of four entitled "The Crusade."

The film surfaced last week after Scoones and a fellow fan, Neil Lambess, heard of its possible existence and tracked it down.

Bruce Grenville had bought the film at a collectors' fair about six months ago and had been showing it as part of his mobile movie screening-business, Sedang Cinema.

Scoones said archive records showed that the film was sent to The New Zealand Broadcasting Corp. in 1967. Where it had been since was a mystery.

"It means there could be more in New Zealand and people are completely unaware of what they have," he said.

The film is now with the BBC in London where it will be restored, copied and released on video. The BBC has sought to get all episodes back since the advent of video.

Grenville gets to keep the original print, which he hopes to screen in Auckland before selling it at auction.