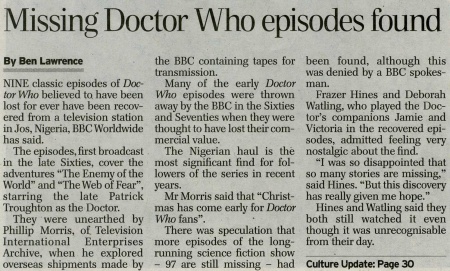 NINE classic episodes of Doctor Who believed to have been lost for ever have been recovered from a television station in Jos, Nigeria, BBC Worldwide has said.

The episodes, first broadcast in the late Sixties, cover the adventures "The Enemy of the World" and "The Web of Fear", starring the late Patrick Troughton as the Doctor.

They were unearthed by Phillip Morris, of Television International Enterprises Archive, when he explored overseas shipments made by the BBC containing tapes for transmission.

Many of the early Doctor Who episodes were thrown away by the BBC in the Sixties and Seventies when they were thought to have lost their commercial value.

The Nigerian haul is the most significant find for followers of the series in recent years.

Mr Morris said that "Christmas has come early for Doctor Who fans".

There was speculation that more episodes of the long-running science fiction show - 97 are still missing - had been found, although this was denied by a BBC spokesman.

Frazer Hines and Deborah Watling, who played the Doctor's companions Jamie and Victoria in the recovered episodes, admitted feeling very nostalgic about the find.

"I was so disappointed that so many stories are missing," said Hines. "But this discovery has really given me hope."

Hines and Watling said they both still watched it even though it was unrecognisable from their day.