Money to be made in science fantasy is fact, not fiction 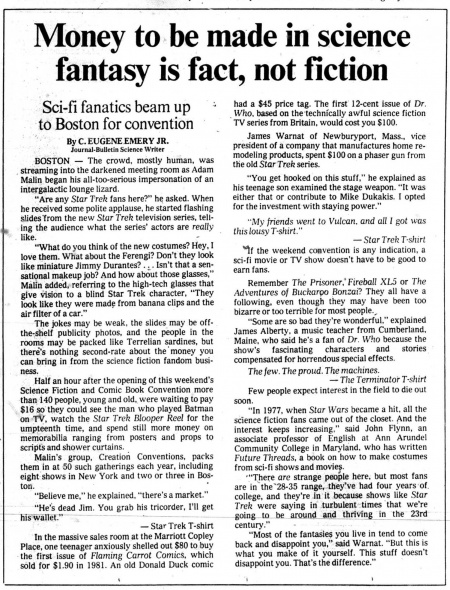 Sci-fi fanatics beam up to Boston for convention

BOSTON --- The crowd, mostly human, was streaming into the darkened meeting room as Adam Malin began his all-too-serious impersonation of an intergalactic lounge lizard.

"Are any Star Trek fans here?" he asked. When he received some polite applause, he started flashing slides from the new Star Trek television series, telling the audience what the series' actors are really like.

"What do you think of the new costumes? Hey, I love them. What about the Ferengi? Don't they look like miniature Jimmy Durantes? ... Isn't that a sensational makeup job? And how about those glasses," Malin added, referring to the high-tech glasses that give vision to a blind Star Trek character, "They look like they were made from banana clips and the air filter of a car."

The jokes may be weak, the slides may be off-the-shelf publicity photos, and the people in the rooms may be packed like Terrelian sardines, but there's nothing second-rate about the money you can bring in from the science fiction fandom business.

Half an hour after the opening of this weekend's Science Fiction and Comic Book Convention more than 140 people, young and old, were waiting to pay $16 so they could see the man who played Batman on TV, watch the Star Trek Blooper Reel for the umpteenth time, and spend still more money on memorabilia ranging from posters and props to scripts and shower curtains.

Malin's group, Creation Conventions, packs them in at 50 such gatherings each year, including eight shows in New York and two or three in Boston.

"Believe me," he explained, "there's a market."

"He's dead Jim. You grab his tricorder, I'll get his wallet."

In the massive sales room at the Marriott Copley Place, one teenager anxiously shelled out $80 to buy the first issue of Flaming Carrot Comics, which sold for $1.90 in 1981. An old Donald Duck comic had a $45 price tag. The first 12-cent issue of Dr. Who, based on the technically awful science fiction TV series from Britain, would cost you $100.

James Warnat of Newburyport, Mass., vice president of a company that manufactures home remodeling products, spent $100 on a phaser gun from the old Star Trek series.

"You get hooked on this stuff," he explained as his teenage son examined the stage weapon. "It was either that or contribute to Mike Dukakis. I opted for the investment with staying power."

"My friends went to Vulcan, and all I got was this lousy T-shirt."

If the weekend convention is any indication, a sci-fi movie or TV show doesn't have to be good to earn fans.

Remember The Prisoner, Fireball XL5 or The Adventures of Buckaroo Bonzai? They all have a following, even though they may have been too bizarre or too terrible for most people.

"Some are so bad they're wonderful," explained James Alberty, a music teacher from Cumberland, Maine, who said he's a fan of Dr. Who because the show's fascinating characters and stories compensated for horrendous special effects.

The few. The proud. The machines.

Few people expect interest in the field to die out soon.

"In 1977, when Star Wars became a hit, all the science fiction fans came out of the closet. And the interest keeps increasing," said John Flynn, an associate professor of English at Ann Arundel Community College in Maryland, who has written Future Threads, a book on how to make costumes from sci-fi shows and movies.

"There are strange people here, but most fans are in the 28-35 range, they've had four years of college, and they're in it because shows like Star Trek were saying in turbulent times that we're going to be around and thriving in the 23rd century."

"Most of the fantasies you live in tend to come back and disappoint you," said Warnat. "But this is what you make of it yourself. This stuff doesn't disappoint you. That's the difference."