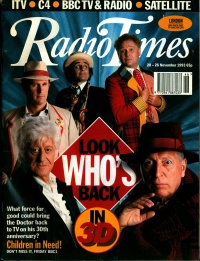 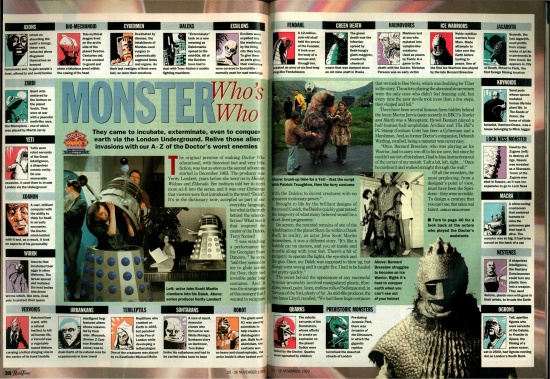 They came to incubate, exterminate, even to conque earth via the London Underground. Relive those aliei invasions with our A- Z of the Doctor's worst enemies

The original premise of making Doctor Who educational, with historical fact and very little fiction, was lost as soon as the second adventure started in December 1963. The producer was Verity Lambert, years before she went on to Minder, Widows and Eldorado. Her instincts told her to inject more sci-fi into the series, and it was over Christmas that viewers were first introduced to the word "Dalek". It's in the dictionary now, accepted as part of our everyday language, but what is the trath behind the science-fiction? What was it that inspired the creator of the Daleks, Terry Nation?

"I was watching a performance by the Georgian State Dancers," he says, "and they seemed to me to glide across the floor, their feet invisible under long costumes. And it was the strangeness of this movement that I wanted to recapture with the Daleks; to invent creatures with no apparent motionary power."

Brought to life by the brilliant designs of Raymond Cusick, the Daleks quickly guaranteed the longevity of what many believed would be a short-lived programme.

On screen, the mutated remains of one of the inhabitants of the planet Skaro lie within a Dalek shell; in reality, as actor John Scott Martin remembers, it was a different story. "It's like a bubble car on castors, and you sit inside and trundle along with your feet. There's a bit of gadgetry to operate the lights, the eye-stick and the gun. Once, my Dalek was supposed to blow up, but things went wrong and it caught fire. I had to be hauled out pretty quickly."

The secret behind the appearance of any successful monster invariably involved manipulated plastic, fibreglass, wood, paint, latex, endless rolls of Sellotape and, in the case of the Yeti, plenty of fur. As mid-60s producer, the late Innes Lloyd, recalled, "We had these huge costumes that we took to Ben Nevis, which was doubling for Tibet in the story. The actors playing the abominable snowmen were the only ones who didn't feel freezing cold, but every time the poor devils took more than a few steps, they slipped and fell."

There have been several famous faces hidden behind the latex: Martin Jarvis (seen recently in BBC1's Scarlet and Black) was a Menoptera; Hywel Bennett played a half-human/half-amphibian Aridian and The Bill's PC Stamp (Graham Cole) has been a Cyberman and a Marshman. And, as former Doctor's companion, Deborah Watling, recalled, being a monster was never easy.

"Once, Bernard Bresslaw, who was playing an Ice Warrior, had to carry me off to his ice cave, but since he couldn't see out of his helmet, I had to hiss instructions out of the corner of my mouth: 'Left a bit, left, right...' Once he misheard and walked straight through the wall."

Of all the monsters, the most perplexing, from a designer's point of view, must have been the Spiridons — they were invisible. To design a creature that you can't see, that takes real talent. ADRIAN RIGELSFORD

Giant ants enslaved by the Animus on the planet Vortis. They were at war with a peaceful moth-like race, the Menoptera - one of which was played by Martin Jarvis

Yetis were robot servants of the Great Intelligence, a shapeless cosmic entity. On one memorable occasion, it used them to invade London via the Underground

A vast, brilliant computer with the ability to think for itself. In an early encounter, the Doctor mind-melded with it and, as a result, it took on aspects of his personality

Insects that incubated their eggs in other lifeforms. The larvae spread and mutated the host bodies into drone Wirrns which, like ants, lived only to protect their queen

Above: Bernard Bresslaw struggles to become an Ice Warrior. Right: its hard to conquer earth when you can't see out of your helmet

boye: brush-up time for a Yeti - first the script ith Patrick Troughton, then the furry costume

Noble reptilian warriors from Mars. Made attempts to take over the Earth before turning to peace. One of the first Ice Warriors was played by the late Bernard Bresslaw

Hatched from a pod, with a natural instinct to kill all human life, a Vervoid was a vegetable-based lifeform carrying a lethal stinging vine in the centre of its hand tendrils

The robotic servants of the Dominators, whose efforts to create an explosion on the planet Dulkis were foiled by the Doctor. Quarks were operated by children

Pre-dating Jurassic Park. there was Invasion of the Dinosaurs, in which the gigantic reptiles terrorised the deserted streets of London

Tall. ape-like figures who were servants of the Daleks. In Frontier in Space, the filming of a prison scene, set in 2540, had Ogrons running riot on London's South Bank

Intelligent frog-featured aliens whose mission, led by their ruler, Monarch, (former Z Cars star Stratford Johns) was to drain Earth of its natural ores for experiments in time travel

Reptilians who crashed on Earth in 1666, but perished in the Fire of London while developing a lethal plague.

One of the creatures was played

A race of squat, muscular clones who thrived on war. While filming a Sontaran story on Dartmoor. Tom Baker

broke his collarbone and had to

be carried miles back to base

so heavy and claustrophobic, the actor inside it often keeled over

Intent on absorbing the earth's energy. these vast, tentacled aliens disguised themselves as bronzed humanoids and to gain people's trust, offered to end world famine

This mythical dragon lived on the arctic side of the planet Svartos. Centuries old, it was created to guard and store a fabulous jewel within the casing of its head

Decimated by disease. the inhabitants of Mondas used surgery to cybernetically augment limbs and organs. As their last vestiges of flesh were lost. so were their emotions

"Exterminate" took on a new meaning as Dalekmania spread in the mid-60s. All of the Doctors have had to duel with Terry Nation's mobile fighting machines

Exxilons were expelled into the wasteland by the living city they built. To give them an eerie glow, their costumes were covered in Scotchlite - normally used for road markings

A 12-million year-old skull held the power of the Fendahl. It took over the body of a woman and. through her, created an army of six-foot-long lug-like Fendahleens

The green death was the infection spread by flesh-hungry giant maggots, created by chemical waste that was dumped down an old mine shaft in Wales

Mariners lost at sea who mutated into vampire-like creatures. Used as pawns by Fenric in a game to the death with the Doctor. Nicholas Parsons was an early victim

Scaroth, the last Jagaroth, used profits from stolen works of art for experiments in time travel. He appears in City of Death, filmed in Paris, the first foreign filming location

Seed pods whose spores mutated human life into plant life. In The Seeds of Doom, the home of villain botanist, Harrison Chase, was a house belonging to Mick Jagger

Used by the Zygons (left) to destroy oil rigs, Nessie was revealed as a Skarasen. Terror of the Zygons was shot in Sussex as it was too expensive to go to Loch Ness

A slime-oozing crustacean that enslaved humans to mine the poisonous gas that kept it alive. The monster was so big, It had to be moved on the back of a van

A shapeless Intelligence, the Nestene Conciousness could turn any plastic item into a weapon. They used Autons, plastic men with guns in their wrists, to invade the Earth