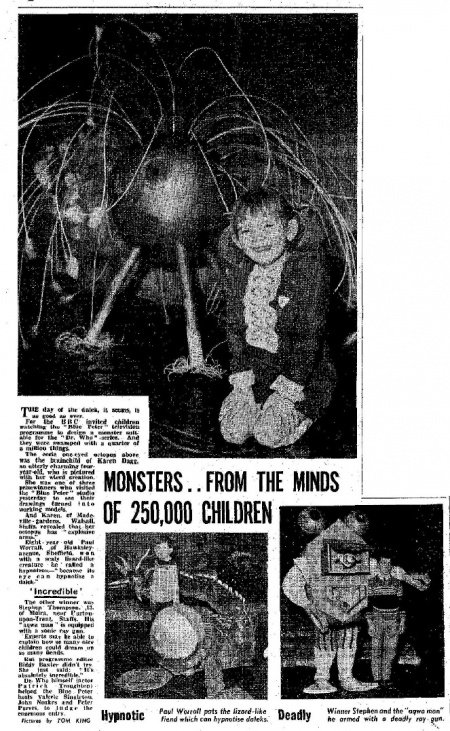 THE day of the dalek, it seems, is as good as over.

For the B B C invited children watching the "Blue Peter" television programme to design a monster suitable for the "Dr. Who" series. And they were swamped with a quarter of a million things.

The eerie one-eyed octopus above was the brainchild of Karen Dagg, an utterly charming four-year-old, who is pictured with her wired creation.

She was one of three prizewinners who visited the "Blue Peter" studio yesterday to see their drawings turned into working models.

And Karen, of Madeville-gardens, Walsall Staffs revealed that her octopus has "explosive arms."

Eight year old Paul Worrall, of Hawksley avenue, Sheffield, won with a scaly lizard-like creature he called a hypnotron—"became its eye can hypnotise a dalek."

The other winner was Stephen Thompson, 13, of Moira. near Barton-upon-Trent, Staffs. His "aqwa man " is equipped with a sonic ray gun.

Experts may be able to explain how so many nice children could dream up so many fiends.

Deadly Winner Stephen and the "aqwa man" he armed with a deadly ray gun.