Monsters are just what the Doctor ordered 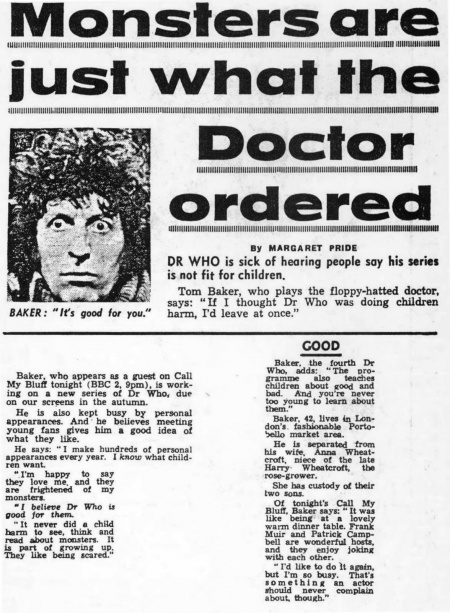 DR WHO is sick of hearing people say his series is not fit for children.

Tom Baker, who plays the floppy-hatted doctor, says: "If I thought Dr Who was doing children harm, I'd leave at once."

Baker, who appears as a guest on Call My Bluff tonight (BBC 2, 9pm), is working on a new series of Dr Who, due on our screens in the autumn.

He is also kept busy by personal appearances. And he believes meeting young fans gives him a good idea of what they like.

He says: " I make hundreds of personal appearances every year. I know what children want.

"I'm happy to say they love me, and they are frightened of my monsters.

"I believe Dr Who is good for them.

"It never did a child harm to see, think and read about monsters. It is part of growing up. They like being scared."

Baker, the fourth Dr Who, adds: "The programme also teaches children about good and bad. And you're never too young to learn about them."

He is separated from his wife, Anna Wheatcroft, niece of the late Harry Wheatcroft, the rose-grower.

She has custody of their two sons.

Of tonight's Call My Bluff, Baker says: "It was like being at a lovely warm dinner table. Frank Muir and Patrick Campbell are wonderful hosts, and they enjoy joking with each other.

"I'd like to do it again, but I'm so busy. That's something an actor should never complain about, though."