Moths Ate My Doctor Who Scarf 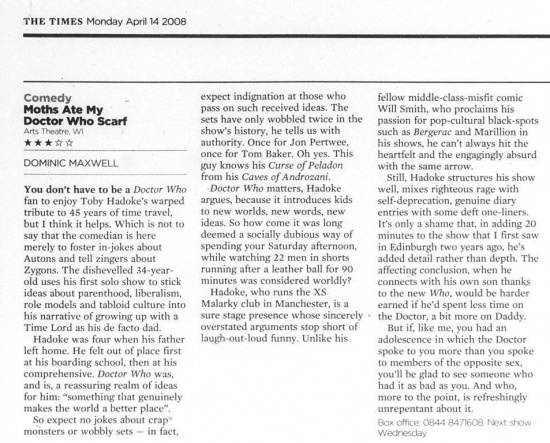 You don't have to be a Doctor Who fan to enjoy Toby Hadoke's warped tribute to 45 years of time travel, but I think it helps. Which is not to say that the comedian is here merely to foster in-jokes about Autons and tell zingers about Zygons. The dishevelled 34-year-old uses his first solo show to stick ideas about parenthood, liberalism, role models and tabloid culture into his narrative of growing up with a Time Lord as his de facto dad.

Hadoke was four when his father left home. He felt out of place first at his boarding school, then at his comprehensive. Doctor Who was, and is, a reassuring realm of ideas for him: "something that genuinely makes the world a better place".

So expect no jokes about crap monsters or wobbly sets - in fact, expect indignation at those who pass on such received ideas. The sets have only wobbled twice in the show's history, he tells us with authority. Once for Jon Pertwee, once for Tom Baker. Oh yes. This guy knows his Curse of Peladon from his Caves of Androzani.

Doctor Who matters, Hadoke argues, because it introduces kids to new worlds, new words, new ideas. So how come it was long deemed a socially dubious way of spending your Saturday afternoon, while watching 22 men in shorts running after a leather ball for 90 minutes was considered worldly?

Hadoke, who runs the XS Malarky club in Manchester, is a sure stage presence whose sincerely overstated arguments stop short of laugh-out-loud funny. Unlike his fellow middle-class-misfit comic Will Smith, who proclaims his passion for pop-cultural black-spots such as Bergerac and Marillion in his shows, he can't always hit the heartfelt and the engagingly absurd with the same arrow.

Still, Hadoke structures his show well, mixes righteous rage with self deprecation, genuine diary entries with some deft one-liners. It's only a shame that, in adding 20 minutes to the show that I first saw in Edinburgh two years ago, he's added detail rather than depth. The affecting conclusion, when he connects with his own son thanks to the new Who, would be harder earned if he'd spent less time on the Doctor, a bit more on Daddy.

But if, like me, you had an adolescence in which the Doctor spoke to you more than you spoke to members of the opposite sex, you'll be glad to see someone who had it as bad as you. And who, more to the point, is refreshingly unrepentant about it.