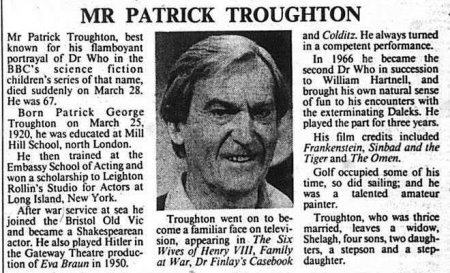 Mr Patrick Troughton, best known for his flamboyant portrayal of Dr Who in the BBC's science fiction children's series of that name, died suddenly on March 28. He was 67.

He then trained at the Embassy School of Acting and won a scholarship to Leighton Rollin's Studio for Actors at Long Island, New York.

After war service at sea he joined the Bristol Old Vic and became a Shakespearean actor. He also played Hitler in the Gateway Theatre production of Eva Braun in 1950.

Troughton went on to become a familiar face on television, appearing in The Six Wives of Henry VIII, Family at War, Dr Finlay's Casebook and Colditz. He always turned in a competent performance.

In 1966 he became the second Dr Who in succession to William Hartnell, and brought his own natural sense of fun to his encounters with the exterminating Daleks. He played the part for three years.

His film credits included Frankenstein, Sinbad and the Tiger and The Omen.

Golf occupied some of his time, so did sailing; and he was a talented amateur painter.

Troughton, who was thrice married, leaves a widow, Shelagh, four sons, two daughters, a stepson and a stepdaugheter.