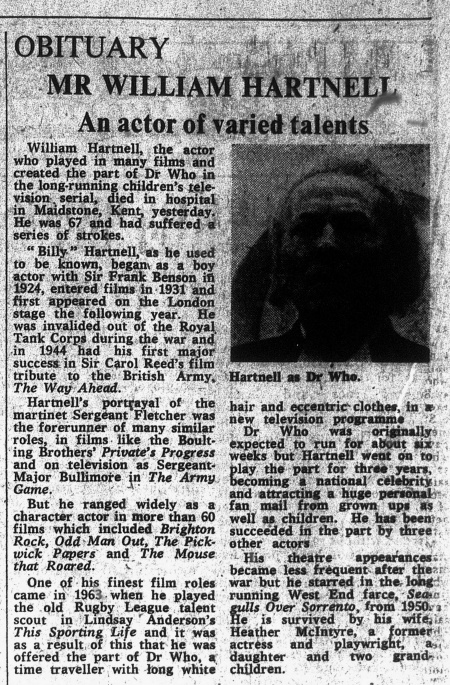 An actor of varied talents

William Hartnell, the actor who played in many films and created the part of Dr Who in the long-running children's television, serial" died in hospital in Maidstone, Kent, yesterday. He was 67 and had suffered a series of strokes.

"Billy" Hartnell, as he used to be known, began as a boy actor with Sir Frank Benson in 1924, entered films in 1931 and first appeared on the London stage the following year. He was invalided out of the Royal Tank Corps during the war and in 1944 had his first major success in Sir Carol Reed's film tribute to the British Army, The Way Ahead.

Hartnell's portrayal of the martinet Sergeant Fletcher was the forerunner of many similar roles, in films like the Boulting Brothers' Private's Progress and on television as Sergeant Major Bullimore in The Army Game.

But he ranged widely as a character actor in more than 60 films which included Brighton Rock, Odd Man Out, The Pickwick Papers and The Mouse that Roared.

One of his finest film roles came in 1963 when he played the old Rugby League talent scout in Lindsay Anderson's This Sporting 14e and it was, as a result, of this that he was offered the part of Dr Who, at time traveller with long white hair and eccentric clothes in a new television programme.

Dr Who was originally expected to run for about six weeks but Hartnell went but Hartnell went on to play the part for three years, becoming a national celebrity and attracting a huge personal fan mail from grown ups as well as children. He has been succeeded in the part by three other actors.

His theatre appearances became less frequent after the war but he starred in the long running West End farce Seagulls Over Sorrento, from 1950. He is survived by his wife Heather McIntyre, a former actress and playwright; a daughter and two grandchildren.