Mum's the word for Doctor Who 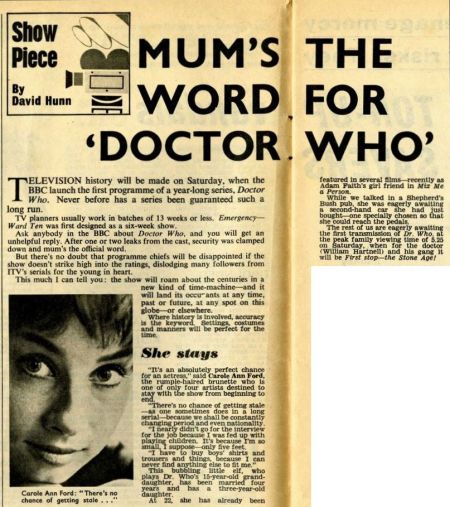 TELEVISION history will be made on Saturday, when the BBC launch the first programme of a year-long series. Doctor Who. Never before has a series been guaranteed such a long run.

TV planners usually work in batches of 13 weeks or less. Emergency—Ward Ten was first designed as a six-week show.

Ask anybody in the BBC about Doctor Who, and you will get an unhelpful reply. After one or two leaks from the cast, security was clamped down and mum's the official word.

But there's no doubt that programme chiefs will be disappointed if the show doesn't strike high into the ratings, dislodging many followers from ITV's serials for the young in heart.

This much I can tell you: the show will roam about the centuries in a new kind of time-machine--and it will land its occupants at any time, past or future, at any spot on this globe—or elsewhere.

Where history is involved, accuracy is the keyword. Settings, costumes and manners will be perfect for the time.

"It's an absolutely perfect chance for an actress," said Carole Ann Ford, the rumple-haired brunette who is one of only four artists destined to stay with the show from beginning to end.

"There's no chance of getting stale — as one sometimes does In a long serial—because we shall be constantly changing period and even nationality.

"I nearly didn't go for the interview for the job because I was fed up with playing children. It's because Ito so small, I suppose—only five feet.

"I have to buy boys' shirts and trousers and things. because I can never find anything else to fit me."

This bubbling little elf, who plays Dr. Who's 15-year-old granddaughter, has been married four years and has a three-year-old daughter.

At 22, she has already been featured in several films--recently as Adam Faith's girl friend in Mix Me a Person.

While we talked in a Shepherd's Bush pub, she was eagerly awaiting a second-hand car she had just bought—one specially chosen so that she could reach the pedals.

The rest of us are eagerly awaiting the first transmission of Dr. Who. at the peak family viewing time of 5.25 on Saturday, when for the doctor (William Hartnell) and his gang it will be First stop—the Stone Age!