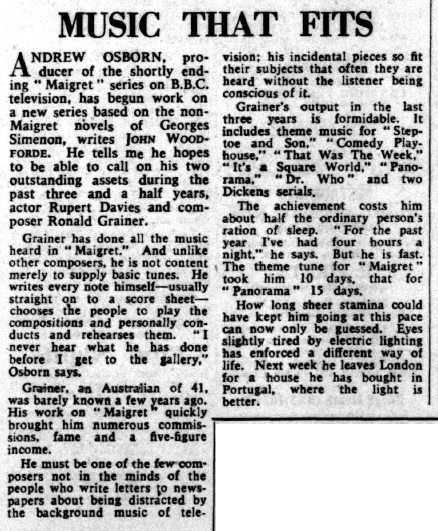 ANDREW OSBORN, producer of the shortly ending "Maigret" series on B.B.C. television, has begun work on a new series based on the non-Maigret novels of Georges Simenon, writes JOHN WOODFORDE. He tells me he hopes to be able to call on his two outstanding assets during the past three and a half years, actor Rupert Davies and composer Ronald Grainer.

Grainer has done all the music heard in "Maigret." And unlike other composers, he is not content merely to supply basic tunes. He writes every note himself—usually straight on to a score sheet—chooses the people to play the compositions and personally conducts and rehearses them. "I never hear what he has done before I get to the gallery." Osborn says.

Grainer, an Australian of 41, was barely known a few years ago. His work on "Maigret" quickly brought him numerous commissions, fame and a five-figure income.

He must be one of the few composers not in the minds of the people who write letters to newspapers about being distracted by the background music of tele vision; his incidental pieces so fit their subjects that often they are heard without the listener being conscious of it.

Grainer's output in the last three years is formidable. It includes theme music for "Steptoe and Son," "Comedy Playhouse," "That Was The Week," "It's a Square World," "Panorama," "Dr. Who" and two Dickens serials.

The achievement costs him about half the ordinary person's ration of sleep. "For the past year I've had four hours a night," he says. But he is fast. The theme tune for "Maigret" took him 10 days, that for "Panorama" 15 days.

How long sheer stamina could have kept him going at this pace can now only be guessed. Eyes slightly tired by electric lighting has enforced a different way of life. Next week he leaves London for a house he has bought in Portugal, where the light is better.