Music for Dr Who 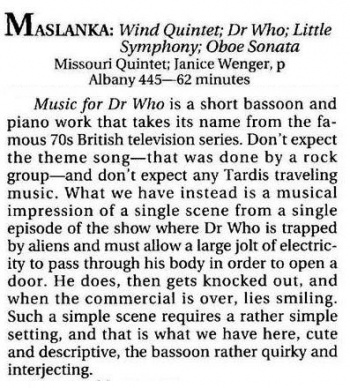 Music for Dr Who is a short bassoon and piano work that takes its name from the famous 70s British television series. Don't expect the theme song—that was done by a rock group—and don't expect any Tardis traveling music. What we have instead is a musical impression of a single scene from a single episode of the show where Dr Who is trapped by aliens and must allow a large jolt of electricity to pass through his body in order to open a door. He does, then gets knocked out, and when the commercial is over, lies smiling. Such a simple scene requires a rather simple setting, and that is what we have here, cute and descriptive, the bassoon rather quirky and interjecting.