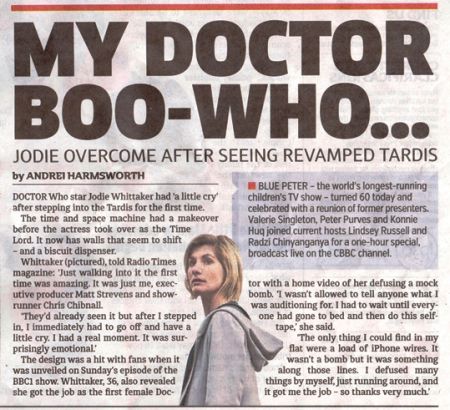 DOCTOR Who star Jodie Whittaker had 'a little cry' after stepping into the Tardis for the first time.

The time and space machine had a makeover before the actress took over as the Time Lord. It now has walls that seem to shift - and a biscuit dispenser.

'They'd already seen it but after I stepped in, I immediately had to go off and have a little cry. I had a real moment. It was surprisingly emotional.'

The design was a hit with fans when it was unveiled on Sundays episode of the BBC1 show. Whittaker, 36, also revealed she got the job as the first female Doctor with a home video of her defusing a mock bomb. wasn't allowed to tell anyone what I was auditioning for. I had to wait until everyone had gone to bed and then do this self-tape; she said.

'The only thing I could find in my flat were a load of iPhone wires. It wasn't a bomb but it was something along those lines. I defused many things by myself, just running around, and it got me the job - so thanks very much.'