My grouse? It's Mr. Coleman 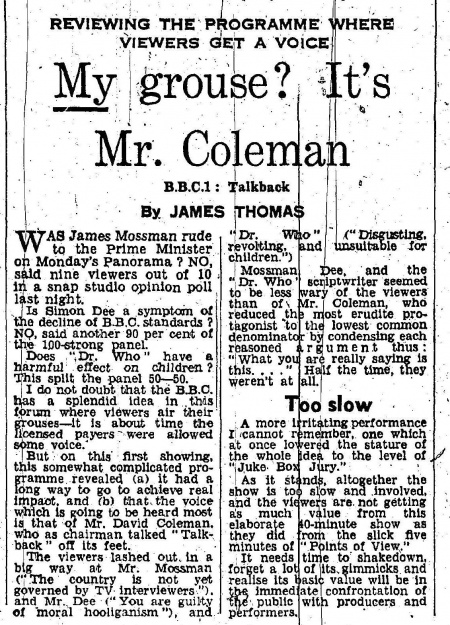 REVIEWING THE PROGRAMME WHERE VIEWERS GET A VOICE

WAS James Mossman rude to the Prime Minister op Monday's Panorama ? NO, said nine viewers out of 10 in a snap studio opinion poll last night.

Is Simon Dee a symptom of the decline of B.B.C. standards ? NQ, said another 90 per cent of the 100-strong panel.

I do not doubt that the B.B.C. has a splendid idea in this forum where viewers air their grouses—it is about the licensed payers were allowed some voice.

But on this' first showing, this somewhat complicated programme revealed (a) it had a long way to go to achieve real impact, and (b) that the voice which is going to be heard most is that of Mr. David Coleman, who as chairman talked "Talkback" off its feet. The viewers lashed out, in a big way at Mr. Mossman ("The country is not yet governed by TV interviewers") and Mr. Dee ("You are guilty of moral hooliganism "), and "Dr. Who" ("Disgusting, revolting and unsuitable for children.")

Mossman, Dee, and the "Dr. Who ' scriptwriter seemed to be less wary of the viewers than of Mr. Coleman, who reduced the most erudite protagonist "to the lowest common denominator by condensing each reasoned argument thus: "What you are really saying is this... ." Half the time, they weren't at all.

A more irritating performance I cannot remember, one which at once lowered the stature of the whole idea to the level of "Juke Box Jury."

As it stands, altogether the show is to slow and involved, and the viewers are not getting as much value from this elaborate 40-minute show as they did from the slick five minutes of "Points of View."

It needs time to shakedown, forget a lot of its gimmicks and realise its basic value will be in immediate confrontation of the public with producers and performers.