My kind of day 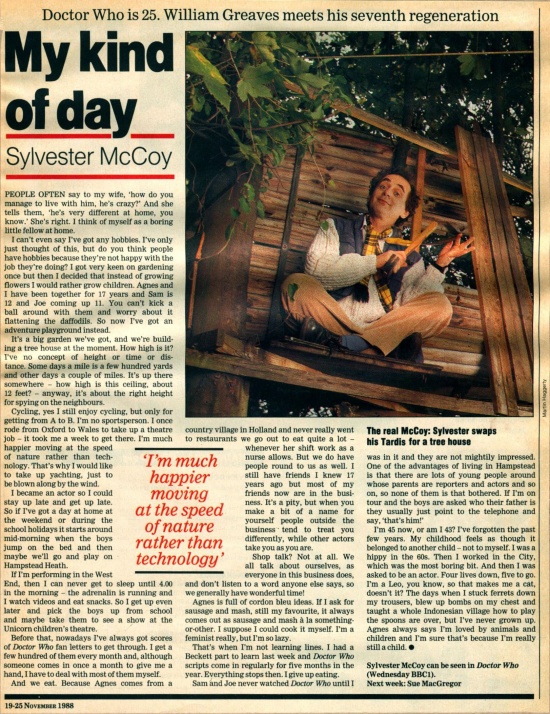 Doctor Who is 25. William Greaves meets his seventh regeneration

PEOPLE OFTEN say to my wife, 'how do you manage to live with him, he's crazy?' And she tells them, 'he's very different at home, you know.' She's right. I think of myself as a boring little fellow at home.

I can't even say I've got any hobbies. I've only just thought of this, but do you think people have hobbies because they're not happy with the job they're doing? I got very keen on gardening once but then I decided that instead of growing flowers I would rather grow children. Agnes and I have been together for 17 years and Sam is 12 and Joe coming up 11. You can't kick a ball around with them and worry about it flattening the daffodils. So now I've got an adventure playground instead.

It's a big garden we've got, and we're building a tree house at the moment. How high is it? I've no concept of height or time or distance. Some days a mile is a few hundred yards and other days a couple of miles. It's up there somewhere - how high is this ceiling, about 12 feet? - anyway, it's about the right height for spying on the neighbours.

Cycling, yes I still enjoy cycling, but only for getting from A to B. I'm no sportsperson. I once rode from Oxford to Wales to take up a theatre job - it took me a week to get there. I'm much happier moving at the speed of nature rather than technology. That's why I would like to take up yachting, just to be blown along by the wind.

I became an actor so I could stay up late and get up late. So if I've got a day at home at the weekend or during the school holidays it starts around mid-morning when the boys jump on the bed and then maybe we'll go and play on Hampstead Heath.

If I'm performing in the West End, then I can never get to sleep until 4.00 in the morning - the adrenalin is running and I watch videos and eat snacks. So I get up even later and pick the boys up from school and maybe take them to see a show at the Unicorn children's theatre.

Before that, nowadays I've always got scores of Doctor Who fan letters to get through. I get a few hundred of them every month and, although someone comes in once a month to give me a hand, I have to deal with most of them myself.

And we eat. Because Agnes comes from a country village in Holland and never really went to restaurants we go out to eat quite a lot -

whenever her shift work as a nurse allows. But we do have people round to us as well. I still have friends I knew 17 years ago but most of my friends now are in the business. It's a pity, but when you make a bit of a name for yourself people outside the business • tend to treat you differently, while other actors take you as you are.

Shop talk? Not at all. We all talk about ourselves, as everyone in this business does, and don't listen to a word anyone else says, so we generally have wonderful time!

Agnes is full of cordon bleu ideas. If I ask for sausage and mash, still my favourite, it always comes out as sausage and mash a la something-or-other. I suppose I could cook it myself. I'm a feminist really, but I'm so lazy.

That's when I'm not learning lines. I had a Beckett part to learn last week and Doctor Who scripts come in regularly for five months in the year. Everything stops then. I give up eating.

Sam and Joe never watched Doctor Who until I was in it and they are not mightily impressed. One of the advantages of living in Hampstead is that there are lots of young people around whose parents are reporters and actors and so on, so none of them is that bothered. If I'm on tour and the boys are asked who their father is they usually just point to the telephone and say, 'that's him!'

I'm 45 now, or am I 43? I've forgotten the past few years. My childhood feels as though it belonged to another child - not to myself. I was a hippy in the 60s. Then I worked in the City, which was the most boring bit. And then I was asked to be an actor. Four lives down, five to go. I'm a Leo, you know, so that makes me a cat, doesn't it? The days when I stuck ferrets down my trousers, blew up bombs on my chest and taught a whole Indonesian village how to play the spoons are over, but I've never grown up. Agnes always says I'm loved by animals and children and I'm sure that's because I'm really still a child.

Sylvester McCoy can be seen in Doctor Who (Wednesday BBC1).

Caption: The real McCoy: Sylvester swaps his Tardis for a tree house